The Farewell Party, or Mita Tova, its original title, is a small miracle. It takes place at a retirement home in Jerusalem, but could happen in many other places. It is about death and euthanasia, but is not a downer. It contains many heartfelt moments, but is often very funny as well. It even has the courage to feature a musical number.

The movie works because none of the cast are over-playing their scenes, and none of the scenes stray too far away from the main story. It starts with Max, who is so ill and in pain that he wants to die. His wife Yana wants his suffering to end. Yehezkel, a friend of theirs, is a bit of an inventor; he invents a small machine out of spare parts like a bicycle chain and a digital readout. Daniel, a former veterinarian, provides the medication. Max presses a button, and within a minute, he is asleep. He won’t wake again.

Yehezkel’s wife Levana is strictly against euthanasia, on moral principles, but also because it’s her husband supervising the procedure. Yehezkel, Yana and Daniel want to keep their machine a secret, but Levana finds out. So do others: they are approached by an old man at Max’ funeral. His wife is very sick, and would they please consider helping her? The movie tackles a few questions with great grace: to what degree is euthanasia moral – or immoral? How much self-determination is there in a dying person’s decision? How about the law? How about Elohim? 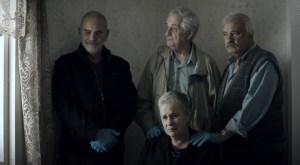 The most powerful image is the gang standing in the corner, wearing blue rubber gloves, watching someone press the button. On the other hand, there is gentle fun in some of the scenes. The gang is meeting in the greenhouse at night, chain-smoking and discussing the loved ones they lost to cancer. Their car is stopped by a policeman who wants to book them for speeding, but has to deal with five maudlin and tearful senior citizens all at once. He thinks they just want to avoid the ticket.

The secret of the movie is in its cast: they stay themselves during the death scenes as well as the comedy. It’s refreshing to know that the end of our days can be a comfort. Mita Tova seems to claim that euthanasia is the right thing to do if it is an option at the right time. It’s up to you to determine when and if the right time has come, but think about how it affects others. In both senses of the term, you are not alone. That is a comfort as well as a responsibility.

I finally finished Augusten Burroughs’ Running With Scissors. And boy, am I glad.

By the time I got to the last chapter, I no longer hated it. I simply didn’t have the stamina for that. I simply found it boring and annoying – and boringly, annoyingly unfunny. There’s little structure in the novel, so the single episodes could all be jumbled up and re-ordered with little to no effect on the book. There’s barely any character development. I’m sure you can write enjoyable novels without character development or structure, but you have to be a hell of a lot better than Burroughs and your story has to be a hell of a lot more interesting. Up to the very end, I felt I was reading the self-indulgent, self-dramatising journal of a drama queen – admittedly one whose childhood and adolescence (as told) were quite horrible, but suffering in itself does not a good novel make.

Anyway, it’s over, and I’ve now started on Haruki Murakami’s short story collection Blind Willow, Sleeping Woman. I recently read his Kafka on the Shore, which was okay but faltered a lot towards the end, and it suffered a lot from having come after The Wind-Up Bird Chronicle, which I think is what the Germans surreally call “ein grosser Wurf”. (Roughly translateable as “a great success”; literally, it means “a great throw”, which might make sense if the Germans played baseball.) I enjoyed a lot of Murakami’s earlier short fiction, perhaps mainly because his excursions from the main plot are always fascinating… and in a short story there’s less of a risk that he runs out of steam and the novel peters out. Murakami is a great writer, but endings aren’t his forte.

What else? I’ve played on in Anachronox, and it’s as delightfully inventive as I remember. I’ve just left Democratus, one of the great inventions of the game: a planet that makes Switzerland’s political system look positively efficient. On Democratus, every decision requires a vote. Every decision. And every decision has to be discussed in great detail, so that the planet’s High Council even fails to come to a decision about the 64 lethal missiles aimed its way by an aggressive insect race. But watch for yourselves:

Since few of you are likely to still find the game and play it, I’ll go ahead and spoil some of the further plot for you: after you save Democratus, the Council decides to reward you by having the planet shrunk and joining your party. As Wikipedia puts it, “the most annoying civilization in the universe shrinks their planet to five feet in diameter and begins following the team around.” And there’s little as boggling as the sight of that man-sized planet happily floating after you, squabbling about your every decision.