One of the games I played recently, the sequelific Batman: Arkham City, is a good case in point, being the offspring of both of those media… and boy, does it ever meet the stereotype. Witness Exhibit A:

Possibly an argument could be made that Catwoman’s open-hearted display of her, ahem, cuddly kittens is there to distract the various henchmen she faces – but no, seriously. We all know why Ms. Kyle is presented in this way, and it has little to nothing to do with tactical advantages fighting testosterone-riddled thugs. 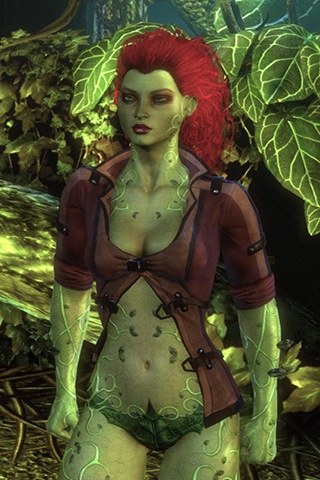 The sad thing is this: in terms of writing, Arkham City isn’t bad, and this includes its female characters. Sure, it’s no Ibsen, it’s pulpy as hell, but within the over-the-top, Grand Guignol genre they inhabit, the characters, their motivations and their actions make sense. And, what’s more, they become surprisingly compelling. I’m not a big fan of comic-book superheroics as such – I like some select examples of the genre,* but I don’t feel any specific attachment or nostalgic yearning for the various Adjective Men and Single Defining Attribute Women bursting out of phone booths in gaudy costumes (and in half the cases practically bursting out of gaudy costumes in phone booths). But over the 20+ hours of playing the Caped Crusader (AKA World’s Greatest Detective – I bet you thought it was Sherlock Holmes, didn’t you? – AKA The Man Who Manages To Remain Po-Faced When People Call Him Silly Names) it’s difficult not to become engaged in the story and in the silly, silly characters.

A large part of this is the voice-acting. Again, we’re not talking about masterclass material – this isn’t Ian McKellen at the Old Vic – but the cast manage to infuse the often pathos-laden, convoluted storyline with wit, humour and, yes, a sense that these freaks in costumes are real. At least for the duration of the game, I found myself wanting to know what happens to the Joker, Rhas Al Ghul, Mr. Freeze and the whole menagerie. Admittedly, I’d still feel a burst of shame if my girlfriend had walked into the room while I was playing with Catwoman (anyone who even thinks of making jokes about joysticks will get a kick in the Johnny Szazs…), but the game almost, almost made me see the appeal of these eternal schoolyard fights that are half semi-mythological epic, half soap opera.

Also: how can you not love a game that features this Donnie Darko-meets-March Hare version of the Batster?

But seriously, folks – this is what Catwoman looks like! Not like two melons pressed into a zip-up leather overall – this is the one, true Catwoman:

*Okay, I’ll come clean. While I wouldn’t call myself a fan of superhero comics per se, I have enjoyed Watchmen, Mark Millar’s Red Son, Joss Whedon’s run on X-Men, Hellboy (does he count as a superhero?), Brian K. Vaughn’s Runaways and Ex Machina, several of Moore’s other ‘science hero’ works, Chris Nolan’s Batman films, and I will want to see the new Spiderman at the cinema, although that’s entirely because of Andrew Garfield. And, hey, good old Jed Bartlett is in it too!