END_OF_DOCUMENT_TOKEN_TO_BE_REPLACED

Director James Gray’s Ad Astra, apart from being beautiful to look at (down in front, Brad Pitt fans!), also sets out to be that rare, beautiful thing: a sci-fi movie of ideas. It is interested in outer space as much as the universe inside the metaphorical man in the moon. If only it trusted those ideas to speak to its audience loudly enough, because then it might not have felt the need to spell them all out in explicit, clunky voiceover.

END_OF_DOCUMENT_TOKEN_TO_BE_REPLACED

A bit later than promised, but here’s the second January Variety Pack, containing all the snap, crackle and pop you could hope for, as well as Teutonic metaphysics and an ageless gnome who’s finally getting old.

Werner Herzog is one of those film makers I’ve been aware of for a long time but whose work I’d never seen. His name triggers childhood memories of zapping into Klaus Kinski films and being weirded out by the guy, and I definitely remember hearing about the epic, ongoing on-set battles between Kinski and Herzog – but I’d never seen more than a couple of seconds of the actual films. I’d heard good things about his earlier documentary, Grizzly Man – but again, if it was ever on I missed it. Cave of Forgotten Dreams hadn’t even been shown at cinemas here when I succumbed to the post-Christmas lure of Amazon.com and went ahead and ordered the film on Blu-ray. Hey, if people praise its amazing visuals, I want all the pixels I can get, right? (No 3D, though – it’s available on the disk, but my TV don’t do three-dimensionality.)

Herzog’s a weird one, at least on the basis of this film. Much of his slow, accented voice-over is heavy on the metaphysics, and while I wouldn’t necessarily say I like it, I cannot deny that I find it compelling – right down to the surreal epilogue featuring albino alligators. It becomes even weirder when Herzog cracks a joke, in the same slow, deliberate, strangely sad voice. (Imagine a voice with a heavy German accent that’s pretty much the aural equivalent of Tommy Lee Jones’ facial expression throughout The Three Burials of Melquiades Estrada.

As much as Herzog puts his stamp on the film, its real star is the cave itself and its amazing paintings dating back tens of thousands of years. Not all of the individual paintings are equally fascinating, but some show striking subtlety and artistry – and they look as if someone left them there just yesterday. Herzog’s film is highly successful at evoking both the age of the cave artworks and their immediacy – freaky amphibian reptiles with blood-red eyes are just an extra. The film is enjoyable even without smoking pot or drinking a bottle of cheap-but-nice red wine beforehand.

… or MI:4, to its friends. In spite of my pretentious-yet-middle-of-the-road film geek credentials (with a few dozen Criterion editions on my shelves I cannot really deny it) I like a good action movie. I’ve enjoyed the Bourne series, Die Hard is one of my favourite Christmas flicks (right there with It’s A Wonderful Life and Nightmare Before Christmas) and I have fond memories of the Californian governor relieving Bill Paxton of his boots, clothes and motorbike.

In those terms, is Em-Aye Four a success? There are moments in the film that I’d consider among the most exciting action scenes of the last ten years. (It helps that we’ve arrived at a point where you can’t always tell a green-screen shot from stunt work.) I sat on the edge of the chair, I jumped, my pulse went up, my breath caught, just as the movie intended.

Apart from that, though, the film fails in one fundamental way: I didn’t care about any of the characters. Is the problem that Brad Bird’s first non-animated movie doesn’t know what to do with its human cast (nor, cheap joke alert!, with Tom Cruise)? Perhaps. It pays lip service to characterisation, but the motivations it provides for its protagonists are uninterestingly written and the actors don’t make them come to life. In fact, you care more about the characters when they’re not angsting about the partners they’ve lost to the job – they’re more relatable when they shut the hell up than when they open their mouths and pretend they’re real people.

For what it’s worth, MI:4 is better than John Woo’s MI:2 – but then, watching a burning dove fly past pooing itself in slow-motion fear is (marginally) better than that film. Is it on par with MI:3? I honestly couldn’t say, because for the most part J.J. Abrahams’ stab at the Missionary position self-destructed about five seconds after I exited the cinema… which is quite the achievement, admittedly, for a film featuring Phillip Seymour Hoffman.

Speaking of achievements, though, CGI has finally managed to conceal the fact that Thomas Cruise, Esq. does not age. The wrinkles that have begun to show on the Cruisester’s face look positively life-like. Will the Academy Award go to Make-Up or to Visual Effects? And is there any truth to the rumour that Cruise’s performance was motion-captured off Andy Serkis?

P.S.: For the record, I quite like Tom Cruise as an actor, when he’s got good material and is directed well – or when he shows that he’s got a sense of humour. (A bit of respecting this! and taming that! also seems to work quite well for him…)

There are many things in No Country for Old Men that recall the Coens’ earlier films, specifically Blood Simple and Fargo; yet it feels notably different in many ways from those films. Intolerable Cruelty (and, from what I hear, Ladykillers) also felt unlike the earlier movies the brothers had made – in some ways, they felt more like someone was trying to imitate their style and succeeded in isolated scenes but, on the whole, failed… Failed, that is, to make a good Coen movie as well as a good film in general.

No Country for Old Men is a good movie. It may even be the best Coen film to date. Chances are I’ll never love it as much as Fargo, but that’s also for nostalgic reasons. Fargo is by no means anything less than a fantastic film, but it doesn’t have the sheer compactness and focus of No Country for Old Men.

And it doesn’t have Anton Chigurh.

Chigurh, as played by Javier Bardem, is one of the scariest movie characters in a long time. I’ve never read any Cormac McCarthy novels, and for all I know he was already frightening in the book, but what Bardem and the Coens make of him is chilling.

However, the film has plenty more going for it than Bardem’s psychotic Prince Valiant and his pneumatic slaughterhouse device. It works so well because the three main characters – Chigurh, Llewellyn Moss (Josh Brolin) and Ed Tom Bell (Tommy Lee Jones) – complement each other so well. The story and the protagonists are balanced to perfection; you’ll rarely see a film that is as intricately structured. Bell and Chigurh are like two poles, balanced on the axle that is Moss: not a bad guy, but deeply flawed and too sure of himself, even after he’s seen the force of nature that is the killer following him. Moss commits several stupid acts in the film, as well as some brilliant on-his-feet thinking, but his greatest stupidity lies in thinking that he has a chance against his opponent. Bell, on the other hand, seems to understand (and accept, in the very end) that there is some evil that is beyond comprehension and that cannot be tricked or beaten. 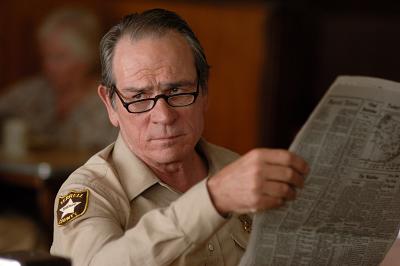 If you’re like me, and an Academy Award is more likely to put you off a film, do yourself a favour. If you enjoy great acting and don’t mind bleakness that makes Sweeney Todd look like Charlie and the Chocolate Factory (okay, that’s not quite fair – like Edward Scissorhands, perhaps), do go and see this film. And see it at a cinema rather than on TV. Roger Deakins’ work, which once again is quite magnificent, deserves the big screen. I just say The Assassination of Jesse James by the Coward Robert Ford, The Man Who Wasn’t There, and, once again, Fargo. 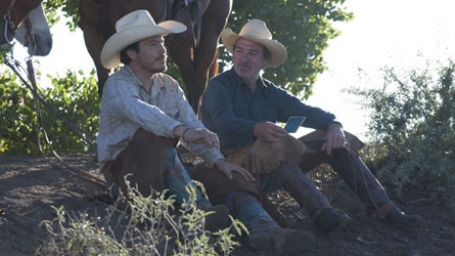