… well, there’s lots of answers to that (dare I say “More shoes”?), but yesterday’s episode of Six Feet Under (“Take my hand”) gave us one clear answer: mentally unstable boyfriends/husbands. Okay, Claire obviously is oblivious to Billy’s manic behaviour, seeing how she’s lost on Planet Claire and likely to remain there for a while. Ruth, however, couldn’t be more aware of George’s mental and emotional problems if she tried.

I’m finding the George storyline in season 5 quite heartbreaking. After his brief sojourn in hospital, complete with ECT treatment, he’s been trying so hard – but it’s obviously an uphill battle. And while Ruth seems intent on being passive-aggressive (something that all of the Fishers are surprisingly good at), it’s understandable that she’s feeling trapped and depressed. I don’t think I could handle rotting food squirrelled in my partner’s clothes any better. 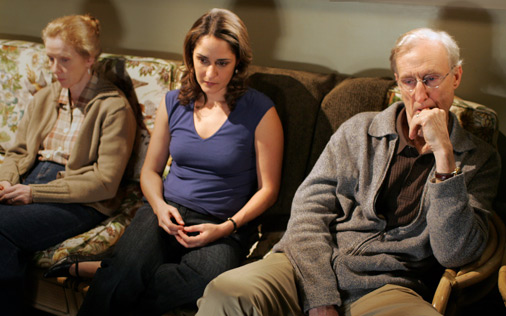 David and Keith seem to be doing best of all of the series’ relationships. In their case, I’m more worried about the surrogate mother they’ve just had an interview with: that woman sounds like she’s likely to saw off her husband’s head and then make cookies, all the while talking to decapitated hubby. There’s something very, very creepy about her cheerfulness. But then, we’ve already had spousocide in Six Feet Under (frying pan to the head – season 2, perchance?) – and in any case, if anyone’s likely to off their beloved partner, it might just be Billy “Let me carve my name on your ass” Chenowith.

And he’s still a dozen times more likeable than Mother Chenowith. Even Grendel would give her a wide berth, I’d wager.