The following is a guest post by Johanna Bucher, a friend and fellow gamer who has a keen eye for the potential of the medium. Thanks a lot to Jo for this end-of-year treat!

One aspect I love about video games is the potential for escapism. More so than film or literature video games enable you to be someone else, a powerful wizard, a Jedi knight, a bad-ass bomber pilot. In video games you fight dragons, fly spaceships, have super powers, and travel through time saving entire galaxies from impending doom. In short: you have a chance to do grand things you never can in real life. And the further away the setting of a computer game from the here and now, the better for me. Or so I thought.

Gone Home has none of the above. It takes place in the real world, it evolves around completely ordinary people leading ordinary, not to say, drab lives. Their fears and hopes are all too familiar. There is nothing striking about them at first, other than perhaps the big mansion they live in. So, what possible attraction could this game offer which puts you in the shoes of 20 year old Kaitlin Greenbriar, returning from a long trip to Europe, expecting to be greeted by her family only to find the house abandoned? 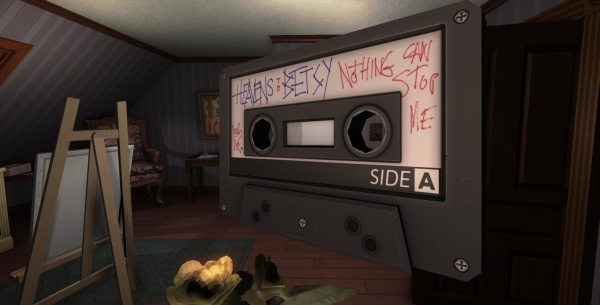 What the game “lacks” in grandeur or exotics it makes up in characterisation and attention to detail. Through audio diary entries at specific points in the game, notes and artefacts found in the house, the mystery (what happened to everyone?) slowly starts to unravel. Not all of the clues found in the house make sense at first but with each new room discovered, a more coherent picture can be drawn, of the goings-on and of the people involved in them. The rewards in this game, then, are not shoot-outs, levelling up or collecting loot, but picking up the threads of strangers’ lives and in the process of getting to know them discovering that you start to care for them and their small lives because, more often than not, they strike a familiar chord.

It is no coincidence that the game takes place in 1995: this is pre-internet, pre-cell phone. It’s the age of VHS, vinyl and audio cassettes, where people write notes and letters by hand, or maybe, if it gets really fancy, send a fax. This leap back into analogue times is more than a nostalgic walk down memory lane (although the game’s creators clearly revel in that.) It also sets a different kind of pace: it slows the game down to the sound of your footsteps pacing about the rooms, the rhythm of the written and spoken word (masterfully supported by wonderfully restraint music and great vocal acting). In a strange way the physical exploration of the space also becomes a mental one.

In a review to the game I read that calling Gone Home a video game is doing it a great disservice. And I agree, this game is not for everyone. It demands a certain amount of patience, the willingness to do rather a lot of reading and rummaging through drawers and armoires. But I would claim that although the game deliberately goes against many video games conventions it is the perfect and only medium to be told in. This story only fully comes to live through the narratology of video games.

Gone Home, then, is not so much about what the story is about and its conclusion (although the topic is not a trivial one and the conclusion is rather touching) but much more abut about how it is told. And summing it up would be the greatest disservice done to it. It has to be experienced. So, sod escapism, this time at least.