I was predisposed towards liking Valiant Hearts: The Great War. I mean, here’s a game about a war that is rarely seen in video games (the First World War), there’s no shooter gameplay in it, it is not about winning, the game has a distinct anti-war streak, the overall tone is melancholy, and Valiant Hearts even does a good job of educating its players about WW1 without turning into a moralising lecture. Whereas the vast majority of games set in wartime put you behind a gun or inside some vehicle equipped with guns, Valiant Hearts is largely pacifist in its leanings. Its protagonists are French, German, Belgian – and canine, since I hesitate to assign a nationality to a dog… as does the game, to its credit. 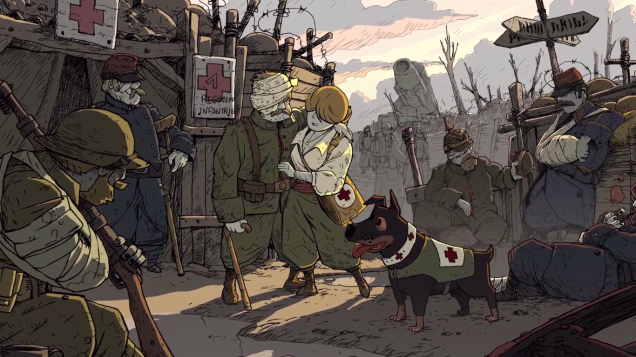 Now, I’d say that the gaming world is better for Valiant Hearts existing, and for it having been funded by a major publisher. (It is the sole Ubisoft game in years that seems beloved by a majority of critics as well as by gamers.) It is, for want of a better word, a valiant attempt to tackle a weighty subject in a format that conventionally is about fun, excitement and player empowerment. There are scenes that are undoubtedly strong and poignant, reflecting the powerlessness of soldiers in the trenches asked to throw themselves into the meat grinder of machinegun fire, in the vain hope to gain a few hundred metres of mud and mangled human remains.

Yet, in the end, I find myself frustrated by what Valiant Hearts does, in spite of its good intentions, for as much as it wants to show the First World War as the immense tragedy it was, it nevertheless sentimentalises those who fought in it. Its protagonists are all stereotypes of kindly, goodhearted people. They are basically equivalent to Walt the dog, and what the game suggests is that the war – an entirely external force, and arguably the main antagonist of the game (its first half presents a cartoonishly evil German Baron as a personal antagonist, a misstep criticised by many) – is bad because it does horrible things to nice, lovely people, whether they are French, German, Belgian or anything else. What does this mean for those who aren’t constantly nice, those who are craven, and perhaps even those who are made into killers by the war?

One of the game’s four heroes, the gruff but kindly Emile, ends up killing an officer ordering his squad to charge the enemy, an action that would result in the death of the entire squad. This is the one violent act any of the protagonists commit directly against another human being, and it is done in order to save others. However, that is not what war is, and most soldiers by necessity become killers before they die themselves. Oliver Stone’s Platoon turned its tagline “The first casualty of war is innocence” into a trite truism, but it is true that soldiers are damaged not just by what happens to them and their friends but also by what they do. One of the ways in which war corrodes the souls of those fighting is that few manage not to get their hands dirty.

Valiant Hearts‘ war allows its heroes to come away clean. Even when it depicts some of its great tragedies – the death charges across No Man’s Land, the gas attacks, the largely unprecedented way the war’s reach increased far into civil society -, the game depicts the war as something entirely external to them. Like Walt the dog, its protagonists remain innocents. To me, this is where sentimentality veers into falsehood, and where Valiant Hearts‘ well-meaning message leaves a bad taste in my mouth. Sadly, the truth that soldiers are made into killers, and that this is not synonymous with heroes, is perhaps served better by the bombastic shootfest of Call of Duty: Modern Warfare than by this sweet, heartfelt, small-scale, melancholy but all too sentimental game.