His name is Judge Michel Racine, but they call him Judge Double Digits because if he puts you away for less than ten years, count yourself lucky. He is stern and serious, and at the start of his next case, he’s cranky because he’s caught the flu. On the bright side, he is in love with one of the jurors, so he might feel merciful today.

L’Hermine is two movies in one. We get to be a part of the inquest into the violent death of a seven-month old girl, where the father and mother both are suspects. The other movie is about Judge Racine and Ditte Lorensen-Coteret, a member of the jury, and their courting each other. These two storylines don’t go too well together: a dead infant should not be the backdrop for a courtroom romance. It’s a small surprise that the movie works as well as it does, and that is mainly thanks to the two leading actors. 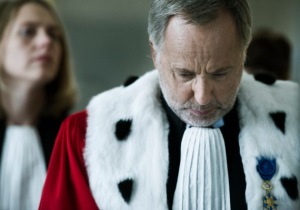 Judge Racine is played by the French actor Fabrice Luchini. I bought his performance immediately. It’s an inspired bit of acting in exactly the right mood, no matter if he is interrogating a witness in court or flirting with Ditte in a nearby restaurant. She is played by Sidse Babett Knudsen, and her role is not an easy one: the screenplay is sort of idealising her, she’s a staff doctor at a hospital and a single mother of two wonderful daughters. She is also the only person in the room who shows any kind of compassion towards the accused mother. The screenplay tries to turn Ditte into a bit of a cliché, but you can almost watch Knudsen fight it off, trying to play a normal woman. She succeeds, by and large. These are two excellent performances in an average screenplay. I like Luchini since Leconte’s Intimate Strangers. Knudsen is brilliant in Borgen and in The Duke of Burgundy, and in Susanne Bier’s After the Wedding. Their courtship is not new, but it is fresh, and they have chemistry.

On the other hand, the court scenes are very well handled, too. We get an insight into how a French assizes court works: the choice of jurors, the opening speeches, audience members coming and going, the trouble with the microphones, lunch talk, suspicions, prejudices, laughter. These were the scenes that almost made me think of a documentary, and many of the people appearing in court are indeed not professional actors at all. That docu-feel works for me, but it jars somewhat with the romantic scenes where Judge Racine wants to get to know Ditte better. The tone of the movie is all over the place. It’s also slightly troubling that the case gets thrown out with two aquittals so that the movie can concentrate on its happy ending. I can recommend L’Hermine despite its flaws – the parts are better than its sum.