Remember the days when we were all wondering what was down that hatch and what the hell those numbers meant? (I sometimes can’t remember what I ate the previous evening, but I will be able to list those damn numbers on my deathbed: 4, 8, 15, 16…) Remember when we were itching to find out more about Jacob, or the Others, or what the hell that black fog creature was? And remember those last couple of seasons that basically mocked us for wanting to know by saying, “Answers? Answers are for dummies. Have a trite, saccharine scene in a church instead.”

I’m actually one of the lucky few who never got to hate Lost, even if I too felt utterly disappointed by its final season. I enjoyed Battlestar Galactica even when it became clear that there weren’t any satisfying answers waiting for us at the very end. (Just don’t mention that present-day epilogue, the only part of the series that I truly hate.) I do wish that writers that regularly resort to mysteries had a better idea – not of what’s at the bottom of their mystery, but of what purpose it does fulfil in the larger whole.

Take The Leftovers, whose first season I finished watching yesterday. It’s very much built around a central mystery: three years ago, 2% of the world’s population just vanished (but don’t call it the Rapture or we’ll send passive-aggressive mute smokers clad in white to stand on your lawn until you get pissed off). Why did those particular people vanish? Were they the good ones, or is there some other reason? Whatever the answer, it’s not one that really needs to be answered by the series. What matters isn’t the why, or at least it doesn’t matter that way: what matters is that those left behind don’t know either, and it matters how they try to deal with that hole right in the middle of the world. Is it their fault? Did they not love the departed enough? Are they guilty of something? Or, and this may be even worse, is it a complete fluke, sheer random chance, and there’s no meaning to be found in any of this? How do we deal with loss, and with being left behind, in the absence of anyone or anything explaining these things to us and providing consolation? None of these themes would benefit much from a sudden revelation, that God did it, or the aliens from Signs, or Neo deleting database entries in the Matrix. 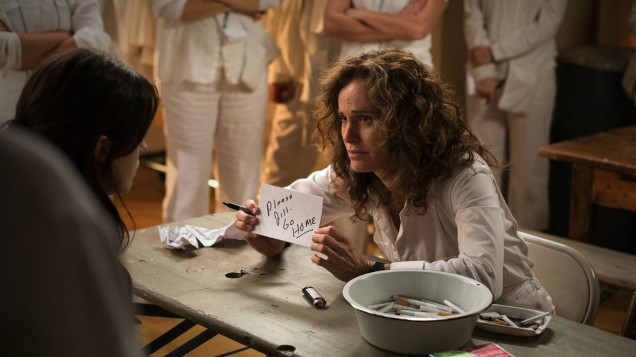 In other words, in not providing an answer to the big question at its heart, The Leftovers does something very right. Its characters are largely driven by the question, or by the absence of an answer. At the same time, while this particular mystery makes perfect thematic sense, others do not. There are characters whose storylines have mysteries woven into their plot: is what arguably is the series’ main protagonist, Kevin Garvey, going mad, or do his fugue states signify something in connection with the Sudden Departure? And what’s with that issue of National Geographic that keeps popping up in his life? While these are intriguing enough in the short run, they’re not the kind of mysteries that tell us anything interesting about the characters. They’re plot mechanisms of the Lost kind, because in essence they all ask the same question: what on earth is going on? And that’s a question whose answer cannot be postponed indefinitely, unless you want to leave the audience feeling that they’re being jerked around. Mysteries that drive the plot need to be answered at some point, because otherwise the plot risks ending up feeling like the writers trolling their audience.

How would people react if their loved ones were suddenly gone from one minute to the next? How would I react? Would I cope, or would I go mad? At its best, The Leftovers tells a story about mourning, depression and metaphysical dread that hints at greater things going on behind the scenes but doesn’t entirely depend on them. At its worst, its questions are red herrings of the kind that make you want to slap a restraining order on Damon Lindelof (who served as the showrunner both on Lost and on The Leftovers) that wouldn’t allow him to get within 100 metres of a computer keyboard or typewriter, because you know exactly that they’re just smug, stupid teases. Of course, I might end up with egg on my face once he a) provides some actual, meaningful answers in seasons 2 and 3 and b) hangs up the mystery habit altogether, but until then I remain intrigued and wary in equal measures. The Leftovers seems a perfect example both of what Lindelof does best and what he does worst. Sooner or later he should decide whether to him mysteries are a means of achieving some kind of revelation – or a smoke screen.

Check out my co-blogger’s write-ups of The Leftovers’ first season.