The first thing that came to my mind when I put on my Oculus Rift for the first time and found myself looking around virtual reality, was a line from the original Star Wars: “You’ve taken your first step into a larger world.” Thank you, Obi-Wan, you’ve put it well. While I haven’t yet spent all that much time in VR, only the occasional hour here and there, I’ve already stared up at the jaws of a T. Rex bellowing in my face, I’ve seen the Little Prince’s planet floating in mid-air just in front of me, and I’ve navigated a one-man submarine into the wide-open mouth of a giant prehistoric fish. 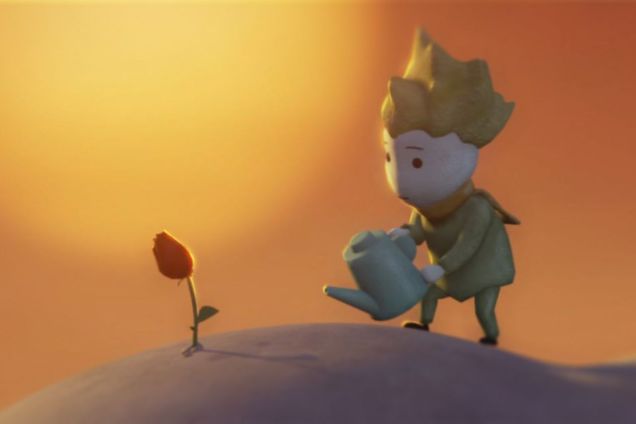 I’ve also looked down at where my body should be, only to see a decidedly more female body than my own,* which was more startling than looking up at a carnivorous terror lizard.

It’s unlikely virtual reality will take the mass market by storm. The technology, while undoubtedly fascinating, is still limited in many ways: in spite of requiring a beast of a computer the resolution is relatively low, which means that the spaces you’re immersed in are blurry and pixellated, and you’re tethered to your PC by a cable. That larger world mentioned earlier is actually pretty small in real-world terms: the holodeck or even the Matrix this ain’t. In addition, the problem of locomotion hasn’t been solved yet for VR: while technically you can move around as you would in the real world, provided the program you’re running factors in movement, you’ll be limited to a relatively small space defined by the cameras you’ve put up, which again need to be connected to your PC, i.e. more cables to stumble over and get caught up in. And that’s ignoring the other factor, which is price: not only do you need a beefy computer, the VR headsets themselves carry a hefty price tag. At present, this is very much for early adopters and tech enthusiasts.

Nevertheless, this is something I’ve been dreaming about, me and probably millions of nerds and gamers raised on the promises of sci-fi. We may not have our flying cars and jetpacks yet, but for all its blurriness Oculus Rift is magic. It does a real number on your brain, simply by putting you inside the virtual world rather than showing it to you on the flat surface of a screen. Not all of the games and demos I’ve played are equally effective at this, but when it works… oh boy. One of the simple demos that plays when you first fire up Oculus Rift puts you on the surface of a moon-like planet, with a humanoid alien creature standing in front of you. At first it eyes you suspiciously, then it gives you a tentative wave – and at least this hardened gamer who has vaporised aliens in the hundreds of thousands couldn’t help but wave back. Another experience, an animated short called Lost, had me sticking my face in some virtual shrub, looking at its leaves from every angle. The illusion wobbles when you reach out to touch the thing in front of you, but it doesn’t shatter – it becomes weirder instead, since the shrub is obviously there in front of you, but you have no visible, physical presence in that world. In that moment, the virtual is more real than you are. 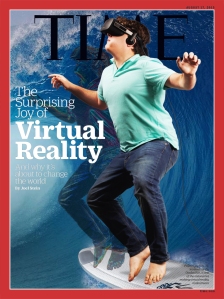 It’s still early days for virtual reality, and to be fair I think it’s not yet where we want it to be. It is a compromise, both technically and conceptually. None of this is a criticism: if consumer electronics had to be kept back until they were perfect, we’d still have shadow puppetry on cave walls instead of video streaming. It’s a new frontier, and one that’ll produce its own pratfalls and idiocies, but I’m excited to be exploring it – looking every bit as silly as Palmer Luckey in his Time Magazine shot, but with a big, goofy grin on my face.

That is, until that T.Rex returns to bite off my head.

*That gender-bending experience? ABE VR, based on award-winning short ABE. If ever you wanted to feel like the victim of a psychopathic robot, this is one way of doing so.