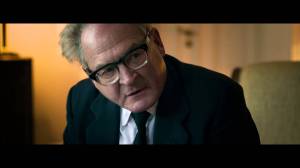 The People vs. Fritz Bauer made me angry. I think it is supposed to. Fritz Bauer was the man in charge of bringing former Nazi key criminals to justice. He worked for the courts in Frankfurt am Main as a district attorney and was put in charge by the German department of justice in the late 50s at his own request when the majority of lawmen there were either former Nazis themselves or at least sympathizers. His task was close to impossible: he was a Jew, a Socialist and a homosexual. It’s entirely possible that his superiors thought that he would be inefficient. In this movie, his department ridicules him, his legal team is utterly useless, unable to locate Bormann or Mengele for many years. His health is failing. In fact, the movie starts with him almost dying. 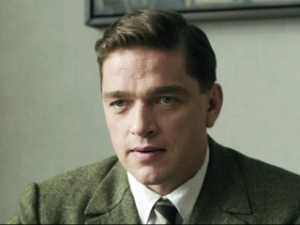 On the other hand, in Argentina, a scraggly old man talks to two journalists, a tape recorder between them, and muses about how he managed to exterminate only a fraction of 10.3 million Jews. This is Adolf Eichmann, a free man, living in Argentina with his family, free to talk about his regret of not being up to the job as SS Obersturmbannführer. While one of the greatest war criminals of our time lives unencumbered in Argentina, the one man who has to chase him down is virtually powerless to do so. 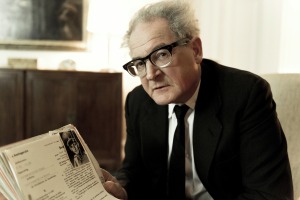 Eichmann’s son has a date with a Jewish girl, whose father recognizes who Eichmann really is. He writes a letter to Bauer, who can’t believe his luck. Bauer also has a problem at this point: he cannot trust his colleagues or his boss with Eichmann’s whereabouts, and so decides to contact Mossad on the sly. It’s a bold move, not only because Bauer is Jewish, but also because not going through the proper channels means high treason. Bauer might be frail, but he is very determined. In fact, when I saw him in Israel on his way to talk to Mossad, sitting in the back of that military jeep, blindfolded and absorbing every pothole in the desert road, I feared for his health.

Bauer is played by Burghart Klaussner, one of the most solid German actors. It’s a great performance, especially in scenes where he says one thing and thinks another. There is a press conference where he tells reporters that they have strong reason to believe that Eichmann is hiding in Kuwait; there is the faintest of smiles in the corner of his mouth because he takes a certain amount of joy in misleading his superiors. Since Bauer cannot do all of the detective work on his own, he recruits the only honest guy in his team, a man named Kurt Angermann. He is played by Ronald Zehrfeld, who usually plays extroverted, handsome down-to-earth guys; when he has to play an introvert, you know that there is something he is hiding just by looking at him. 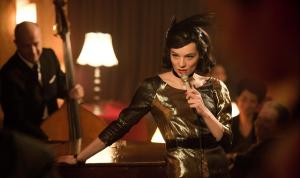 Angermann is also gay. While Bauer was said to be gay, he never admitted as much and never had any male relationships. He was married, and at one point in the movie, he tells Angermann: “My wife lives in Denmark, I live here. It’s the most solid marriage I know about.” Angermann is married, too, but leads a double life. Bauer doesn’t mind Angermann’s homosexuality, but he sees their case against Eichmann endangered because of Angermann’s affair with a night-club singer (Lilith Stangenberg).

Bauer and Angermann seem to make progress in extraditing Eichmann, but Mossad is more than just Bauer’s helper. They agreed to kidnap Eichmann in Argentina, but brought him to Israel, where he was trialed and hanged in 1962. Bauer probably never saw himself as a traitor because he must have seen the still Nazi-infested authorities as unlawful and so unable to betray. Justice was to be had only outside of the German department of justice. As soon as Angermann, not a historical figure, gets jailed for his homosexuality, Bauer has to work alone, and has to learn about Eichmann’s death. The last twenty minutes or so are weaker than the rest of the movie because they no longer lead towards a climax. Luckily, there is no scene where Bauer is giving up and leaving the country, or even dying. He rolls up his shirtsleeves and gets back to work – within the system this time, inexplicably. It’s a weird ending to a good movie.