Years ago, I went to see the stage version of The Lion King in London. As the lights went down and people stopped talking, knowing that the show was about to begin, a kid one or two rows in front of me piped up. “I don’t like lions!” Well, tough, kid, you’re going to get lions, whether you like them or not.

Most people like lions, if they keep their distance and don’t attempt to eat you or your loved ones. What many people don’t like? Musicals. Some people don’t like action films, others aren’t really into horror movies, but I don’t think there’s a single genre that as many people claim not to like as musicals. To be honest, though: until a few years ago, I would have said the same, though I may have qualified it a bit more – I don’t like the Platonic ideal (i.e. the pretentiously formulated stereotype) of a musical that people may think of when the genre comes up. At the same time, some of the films I liked best growing up were musicals, such as Hair or Jesus Christ Superstar. I’ve even rewatched some musicals that didn’t click for me when I was growing up, like West Side Story, and I’ve come to greatly enjoy them. Similarly, “Once More With Feeling” is one of my favourite episodes of Buffy the Vampire Killer, and I’d defend its artistic merits as much as I would those of my favourite less jazz-handy episodes. 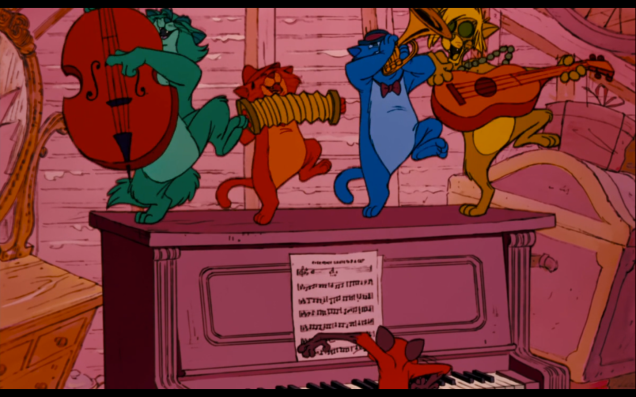 The thing is: as much as I can sympathise with the whole “I don’t like musicals” thing, I’ve come to think that it’s not too different from someone saying, “I don’t like Shakespeare. People all talk funny. No one normal talks like that.” Which is true: if anyone spoke like a Shakespearean character, chances are they’d end up doing so in a mental institution. Similarly, if anyone broke into song in real life the way they do in musicals, if they started to jump on cars and shake their stuff in weird and wonderful ways, it would probably not end well.

Why are people more willing to accept one kind of stylisation but not another? Perhaps it’s that the musical isn’t just seen as a form but also as something more specific: ask people what they associate with musicals and they may start talking about schmaltzy romance and sentimentalism first and foremost. To take up the Shakespeare example again: you can imagine a musical version of A Midsummer Night’s Tale more readily than you can Macbeth! or King Lear and I.

Nevertheless, I’ve moved away from my earlier issues with the form, for one simple reason: I’ve seen too many musicals that were worthwhile screen or stage experiences, not in spite of being musicals but because of it. There’s a heightening effect that comes with the combination of stylisation and the use of a medium that is processed first and foremost in affective rather than cognitive terms, and the ways in which both our cognitive and affective responses can interact in weird and wonderful ways. Take the highly effective layering of elements you get in the best scenes in La La Land, allowing for moments that are ironic, referential and earnest at the same time, that are tightly designed while also coming across as spontaneous and genuinely felt. Take the giddy elation in something like Fiddler on the Roof‘s “Miracle of Miracles”, which makes you wonder indeed how someone could not burst into song.

Heightened style, as much as heightened emotion, is tricky to pull off in films. Filmmakers don’t have to justify their use of Hollywood realism, which is no less stylised and removed from actual reality than, say, the song and dance of musicals, because we’re conditioned to accept it as the obvious representation of reality. Musicals can easily come across as camp, their conventions can seem trite or silly – but in themselves they are no more problematic than a character delivering a speech in iambic pentameter, or the myriad of tropes we swallow without a second thought. Obviously there are many musicals that are bad, kitschy and trite, but that’s just another example of Sturgeon’s Law in effect. Without musicals, we wouldn’t have the pitch-perfect final notes of Dr Horrible’s Sing-Along Blog. We wouldn’t have the queasy, sweaty, cynical and utterly perfect desperation of All That Jazz‘s “It’s showtime!” We also wouldn’t have John Carney’s Once, to my mind a more genuine romance than the vast majority of supposedly realistic romances.

So, here’s my challenge to those of you who consider themselves film fans but who have avoided, say, La La Land because they, too, dislike musicals. Check out Roland Joffé’s All That Jazz – or indeed Cabaret (I defy you to watch “Tomorrow Belongs to Me”and not feel a chill at its present-day relevance.) Or see if you can catch a performance of Sondheim’s Assassins, another musical that is as astutely perceptive of the world today as some of the best documentaries. Or, indeed, go and see La La Land and leave your preconceived notions about the genre at home. Give it a chance, because musical or not, it’s an example of filmmaking at its most exuberant. If you’re a self-proclaimed musical hater, be prepared for a tough first five minutes – but I am as happy to recommend this one to lovers of film as I am to recommend any other film I’ve enjoyed in the last year. I promise: you won’t have to endure a single pair of jazz hands.