It’s been a while since Star Wars had the ability to surprise me – and in part that was its appeal: being the galactic equivalent of comfort food. Pop in a Star Wars episode and you generally know what you get, namely an epic fairy tale with farm boys destined to greatness and cloaked space wizards of the good and evil variety. You get secret weapons blown up after a one-in-a-million plan pays off. You get grand revelations, redemption and heroics. 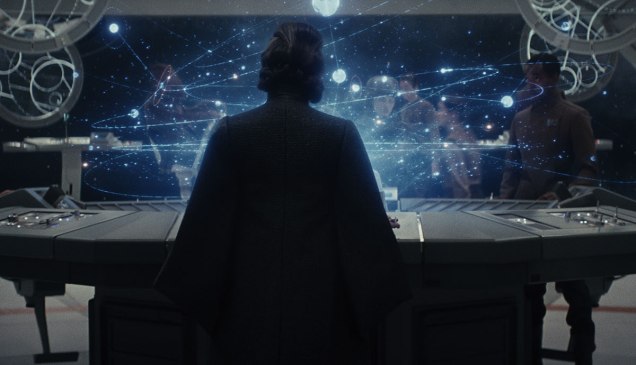 Along comes The Last Jedi, and guess what – Star Wars has the ability to surprise me again.

Note: Before anything else, let me note that this is less a review than me trying to make sense of some of the conflicting things The Last Jedi made me feel as I was watching it; these may change when I rewatch the film. Nevertheless, there are spoilers in the following.

Let’s get some of the obvious things out of the way first: many of the complaints about the film are bullshit spouted by fanboys with an offputting sense of entitlement concerning their favourite franchise – but not all of the criticism can be reduced to this. I have zero patience for the people who criticise The Last Jedi for taking more of a political stand that often was already implicit in the original films, but the movie does have its flaws and it does suffer from pacing that is all over the place, lurching in fits and starts and juggling multiple storylines much less elegantly than The Empire Strikes Back did. Its sense of humour is goofy and made me laugh more than once, but it is oddly contemporary for an “A long time ago…” space opera and I suspect it might date the film more quickly than the original’s possibly more timeless voice. More than that, though, there is an impish glee to the way in which the latest Star Wars episode confounds expectations built up by The Force Awakens and by decades of Star Wars lore that I can imagine feels almost willfully rude to some of those invested in classic Star Wars.

Part of me can relate to the disappointment some fans are feeling, because The Last Jedi is eager to tear down some of what we’ve come to take for granted. It tells us that what the old films have taught us may not be true. It says that derring-do heroics by individuals chafing against authority may be meant well, but often they don’t win the day and rescue the princess: they end up getting people killed. It points out that sometimes the heroic thing isn’t to sacrifice yourself, but to run away so you can fight another day. It takes the grand epic narrative that so many of us have grown up with and suggests that we may not secretly be the offspring of space royalty, that we are not given meaning by fate and blood.

Part of me misses the epic that happily embraces its own epicness without needing to subvert it. The Last Jedi thumbs its nose at many fan hopes and expectations. It is nothing if not ambivalent about Grand Narratives of Good and Evil, and it is distrustful of cocky heroics. It doesn’t want us to believe in fairytales unquestioningly – but I think the critics are wrong that see it as a great, big “fuck you” to tradition, grand gestures and significance through genealogy. I think its attitude towards the series (and its fans) is a more loving one – and it’s sad that so many people don’t understand this simply because the love isn’t unconditional.

The Last Jedi‘s characters, from orphaned Rey to tortured Kylo Ren and grizzled Luke, are deeply concerned with the past and its glories, though in different ways. Rey believes that the past, in the shape of the last Jedi Luke Skywalker, is the only thing that can save the galaxy from the evil that is the Empire Reheated AKA The First Order. Kylo Ren, meanwhile, is slowly realising that the more he tries to be Darth Vader, the more he comes across as a pathetic fanboy – so he now wants to destroy the past, kill his remaining father figures, wipe the slate clean and begin anew, ideally with his newly found telepathic crush Rey. And Luke? Channeling Yoda and having become an old crank, he is in surprising agreement with the erstwhile apprentice that turned to the Dark Side in no small part due to Luke’s own fears… oh, and an almost-act of apprentice murder. Luke, too, believes that the galaxy needs for the Jedi to die – and by this he means above all the belief in the Grand Old Men (and very occasionally Women) that determine the fate of the galaxy, the belief in unfailing legends of yore.

It is tempting to read The Last Jedi‘s mission statement as a big middle finger to the past, to tradition and convention – but the film draws a clear distinction between destroying the past on the one hand and questioning it and its value in a more affectionate way on the other. Some have argued, not without justification, that The Force Awakens was akin to Kylo Ren in that it turned the past into a fetish, and as much as I enjoyed watching The Force Awakens myself at the time, it did feel like an extended, expensive game of “Remember when…?”, giving us new desert planets, new Emperors and new Death Stars that only differed from the old ones by being Bigger!, Better! and Now With More Pixels! Abrams’ film felt like we were repeating the old story almost word for word.

However, where Kylo Ren upends his fanboy ways, as if the only way to free yourself from the anxiety of influence was to kill your fathers literally and metaphorically, The Last Jedi does something stranger and more magical: it questions the legend, but at the same time it acknowledges its power to inspire. Its Luke Skywalker is a man who has made mistakes, who has failed, who doubted himself and his legend too little and too late; he nevertheless gets to end his life as a legend, sacrificing himself for the new Rebellion. It is no coincidence that another returnee from the original films is old-school Yoda, that slightly deranged imp who was proof that greatness can come in the strangest, smallest shapes. The Last Jedi is more sensitive to the subtle ways in which the original Star Wars trilogy was stranger and decidedly less conservative in venerating Joseph Campbell’s Hero with a Thousand Faces template than some of the ossified ideas of what Star Wars needs to be allow for.

At the very end of the film, as our heroes – nobodies whose parents equally were nobodies, who are not imbued with significance due to their bloodline but due to their actions – have made their escape to fight another day, carrying with themselves their failures as much as their successes, we see a child on a faraway planet, playing with the Jedi toy he has made himself, imagining his broom handle to be a lightsabre. It is the legend of Luke Skywalker, of heroic Jedi and villainous Sith, that inspires him, but it is his own imagination that turns him into a potential hero: not his blood, not his genes, not his midichlorian count. The Last Jedi tells us not to turn our legends into Holy Writ – but neither does it tell us to break our action figures, tear up our posters and throw our X-Wings into the trash. The film may have a laugh at fanboy dogma, but it definitely values the power of fairy tales and legends to inspire children.

5 thoughts on “The legend is dead – long live the legend”