To my right is the station, Kronos II, looking decidedly worse for wear. To my left is Saturn, its rings glittering with a stark beauty. I can see the mining asteroids and container fields in the distance – and the inscrutable anomaly, extending tendrils of pure energy in my direction. Everywhere else is the cold infinity of space, beautiful and deadly. There is only one thing to do: I grab hold of the railing and, slowly and methodically, make my way towards my captain and friend, Liv, pulling my weightless body through space inch by inch. 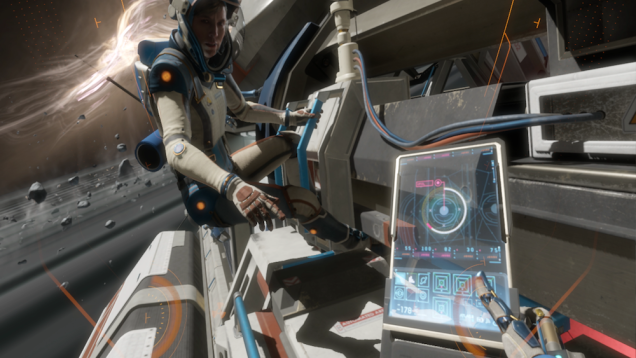 Most of us will never experience what it’s like to be in zero gravity. None of us will have the grand science-fiction adventures many of us dreamed of as children. I’m not sure I’d actually want to experience anything as intense as the opening half-hour of Alfonso Cuaron’s Gravity – but virtual reality has already given us an intriguing approximation of these things in Lost Echo.

Much of the game is familiar, from many, many sci-fi films and books: you play the humanoid robot Jack aboard Kronos II, a place not far removed from the spacebound microcosms of Sunlight or 2001: A Space Odyssey. Lone Echo‘s environment (for the most part, at least) is of the more realistic, low-key kind, inspired as much by footage from aboard the ISS as it is by the more fantastic imagery of much sci-fi cinema. What makes the game unique, though, is its method of locomotion, a creative approach to one of virtual reality’s biggest conundrums. One of VR’s main attractions is that it puts as few barriers as possible between the player and their environment, but moving from one place to another doesn’t adhere to this – players have limited space at their disposal, and this space generally cannot be reconfigured on the fly, so how does VR let a player stuck in an actual space that’s a few feet in each direction move down a long virtual corridor, down stairs or up a ladder? The common solutions – giving the player the ability to teleport or alternatively letting them move by pushing their joystick in a certain direction, as in regular games – all serve to remind us that we aren’t really in that corridor that we see stretching into the distance in front of us. They highlight the cracks in the illusion. 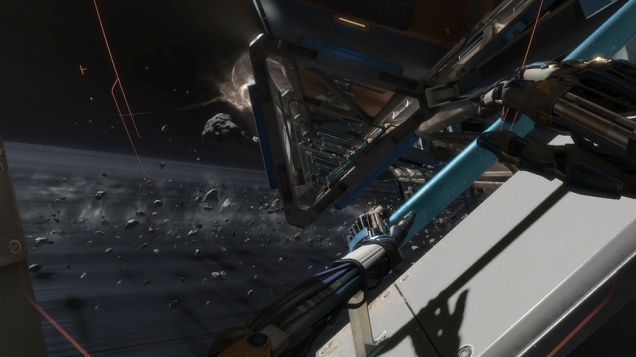 By putting us in zero gravity, Lone Echo opens up another possibility: using handheld motion controllers, it lets us grab hold of our surroundings, pull ourselves around and push ourselves away from things, which sends us floating through those selfsame corridors – or from the relative safety of the station towards one of the small, skittish transporters, which takes some resolve the first time you do it in the game. It’s one thing to always hold on to something solid with one hand while reaching for the next handhold with the other, but Lone Echo takes us off the safe, reassuring tether and lets us float here, there and anywhere. The android Jack, whose body we inhabit for the duration of the game, also has other abilities, including built-in jets that let us zoom around like a cut-rate Iron Man, but it’s the act of moving around by holding on to surfaces and edges, pushing and pulling our body, that feels like a VR-specific act of magic. We don’t just see our surroundings: we touch and grab them, we hold on for dear life as the transporter we’re on comes to life and speeds away or as the station is buffeted by waves of energy. (And occasionally, as Liv leads the way from one part of the station to another, we hitch a ride by grabbing hold of one of her legs, being pulled along from the bridge to the cargo section.) We experience the world the game puts us in in a surprisingly tactile way.

Obviously we’re not really holding on to the station but to the two oddly shaped controllers in our hands, but it is surprising how well VR’s combination of graphics, sound and movement, in particular a game’s representation of the player’s position and movements in the virtual world, can trick the player into stitching disparate sense data into a coherent whole. You reach out, you close your fist, you see your hand move towards the space-age tool in front of you and grab hold of it, you feel the resistance of the controller as your fingers close on it – and in your head, you’re actually holding on to the tool.

Lone Echo is a good game, it’s well written, nicely paced and has good production values, but without VR it wouldn’t be particularly memorable. In VR, its world comes to life and Kronos II becomes one of the most memorable environments I’ve ever navigated in a video game – because I’ve had my hands all over it. A virtual world becomes something else, something more, if you’ve manoeuvred around it not by pushing a stick in this direction or that but if you’ve had to physically take hold of it. Quite literally, I’ve grasped the world of Lone Echo, making the virtual feel that much more real.

One thought on “They create worlds: Lone Echo”