Frederick Wiseman has done it again. Two years ago, I wrote about National Gallery, a three-hour long documentary that brought us an all-encompassing view of the National Gallery in London. I’ve recommended it at the time, and I still recommend it. Now Wiseman has made an even longer movie about one of the best-known institutions in New York: Ex Libris: The New York Public Library. I have to warn you: it’s 197 minutes long, and it turns Wiseman’s completist tendencies into a disadvantage.

If Wiseman leaves out anything in Ex Libris, I don’t know what that could be. We even get the head of maintenance who is giving a review about which rooms got painted or renovated and what still remains to do. In this his latest feature (his 44th), Wiseman uses the same technique as in all the others: we get to be observers into virtually all aspects of the library until we’re convinced that checking books in and out is the least thing that the NYPL does. We get to listen in on directorial meetings, where dedicated people have to provide more services with less funding. We get to sit in organisational meetings with highly enthusiastic managers who love their job and genuinely care for their customers.

We are allowed to listen to the people who answer the phones, patiently explaining that a unicorn is an imaginary animal. We see employees fetching books, distributing them to the branch offices, people labelling tapes, and so on, and so on. There are lecturers I could have listened to for hours, for instance the lady who tells her audience about the economy of slavery in the North and South after the Civil War. There are administrators who instruct customers about borrowing a laptop, or how to use a Braille typewriter. There are teachers who teach math, reading, writing to young kids with admirable patience. There is a job fair, there are courses for the jobless. I could go on and on – and it is that long list of scenes that is the movie’s double-edged sword: I expected to see a window cleaner or a stonemason at any moment, but I came away with the feeling that I knew exactly how to borrow a book just by watching.

Not all of those scenes are interesting, and a stern editor would have cut half an hour or more. There is, for example, a round table of librarians in the Bronx branch, who decide to buy more math teaching material because that is what the parents request most for their kids. Another meeting in another branch is about a complaint from some black parents about how slavery is mentioned in a school history book with just one or two sentences. Those scenes have to stay; others. such as the organisation of the fundraiser, are just too long or repetitive to be an advantage.

There are also guest lectures by Ta-Nehisi Coates, Alan Hollinghurst, Elvis Costello and Patti Smith. The fact that Wiseman refuses to give us their names is a mistake. I had to look up Hollinghurst to make sure that it was him. It helps that Costello holds his autobiography so that everyone in the audience and we can see his name. Other aspects of Wiseman’s method are better-suited: he refuses to show us talking heads speaking into the camera. Everything in his documentaries happens in real time. There is also no voice-over and no music, and I was wondering if Wiseman could have applied for a Dogma certificate. And there is his trademark, which might be marvellous in some of his best documentaries, but failed him here: he refuses to have any kind of read thread in his editing. Five minutes of a budget meeting, cut to students typing, napping or thinking, cut to an establishing shot for a NYPL branch, which one might be unclear, then cut back to the empty marble halls of the main building, then a fundraiser, then to a librarian explaining the picture filing system, and so on. In a movie of more than three hours, that is asking a lot of the audience. 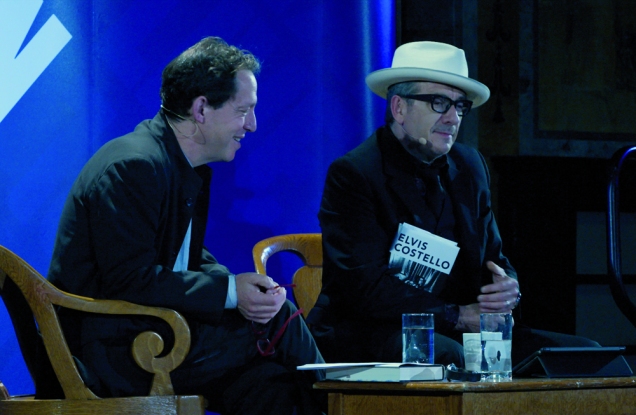 In a way, though, Ex Libris is more honest than most documentaries. Since it does not feature any interviews or historical footage, we are in the same situation as customers with an all-access pass, so things on screen are less likely to be embellished or dramatised. There are many moments where the camera catches deeply human situations when visitors, users and employees think they are not on camera. My guess is that Wiseman filmed for long stretches of time until people forgot about the camera or no longer cared about it – there is a job to be done, after all. Wiseman must have ended up with a few hundred hours of footage. If he only had the sense to give his wealth of material some kind of order.