I’ve heard it said that the majority of neo-nazis and other members of extreme right-wing associations contemplate suicide at least once in their lives because subconsciously, they sense that their world-view is wrong. In Guy Nattiv’s Skin, Bryon Widner (Jamie Bell) is at this point. He is a member of the Vinlanders Social Club, not a social club at all, led by Fred ‘Hammer’ Krager (an unrecognizable Bill Camp), a stern father figure who is married to Shareen (Vera Farmiga), who actively tells everyone that they can call her Mum. It’s a bunch of people who have nowhere else to go, socially as well as economically, and they are just happy that there is someone who takes care of them and gives them things to do, no matter how vile or poisonous their chores are. The VSC is a family for people who never had a proper family. It would be a huge mistake to think that Fred and Shareen are in any way dumb or ridiculous. They provide food and shelter for strays and manipulate them into becoming white supremacists. They are not above murder, so be warned. The more they clash with their preceived enemies, the more they come alive, and the more dangerous they are.

Bryon has a secret moral code, apart from what his nazi club tells him: there is a right-wing heckler at a nazi rally who throws stuff at some very young girls who sing a song on stage, dressed in some German-style clothing. Bryon won’t have it and starts choking the heckler. The girls are the daughters of a woman named Julie, who is decidedly not a right-wing nut, but there are bills to pay, and the girls can sing and are cute in their Bavarian dirndls. And Bryon, who is never really sober, can’t get Julie (Danielle Macdonald) out of his head. Small wonder: Julie is completely devoid of manipulative bullshit, she speaks her mind, and Bryon can see that. She is utterly different from anyone around him. It might be unfair to lay that on her, but she is Bryon’s way out.

There are also cringe-inducing scenes of Bryon’s body when he gets his tattoos surgically removed. He is covered in them, and so it will take 25 painful sessions to get rid of them. It’s the most physical sign that he really, really wants to quit. It’s also some kind of absolution – take that with as little or as much religious undertones as you like. Not that quitting is easy – Fred and Mum are after Bryon and Julie and her kids. 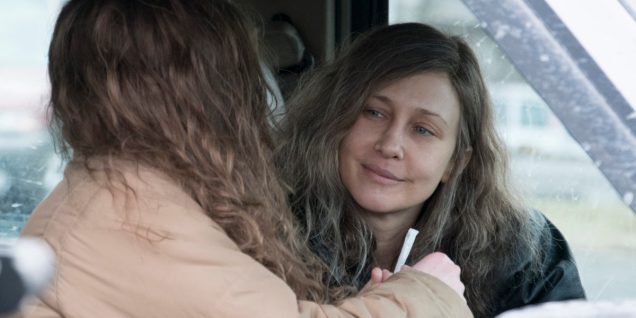 The casting is a surprise. Besides the names already mentioned, there is an almost unrecognizable Mike Colter as an activist who stands his ground and pesters Bryon for so long until the African-American is the first address for the repentant supremacist about quitting. There is a completely unexpected cameo by Mary Stuart Masterson as an FBI agent. You might remember Daniel Henshall as the master manipulator from The Snowtown Murders, and his character here is not so far away from his previous role.

It’s ridiculously easy to join the VSC because Fred and Bryon know exactly for what weaknesses to watch out for in a person. There is a young boy called Gavin who even I could see was easy prey. Then you’re in, drink a lot, have meaningless sex with a girl because she is around. You seem loved and cared for for the first time, but are going nowhere. And then the suicidal thoughts come. Bryon does something about them, others don’t.