Welcome to Six Damn Fine Degrees. These instalments will be inspired by the idea of six degrees of separation in the loosest sense. The only rule: it connects – in some way – to the previous instalment. So come join us on our weekly foray into interconnectedness!

I was in Florence some years ago, it was a one-week holiday, and it should have gone on longer, because I grew to like the city a whole lot. For instance, in the Nelson bookstore, you could take any book you wanted from their shelves and into their coffee shop and read it or leaf through it. The downside was that some of their books no longer looked pristine. The downside includes that the shop does not seem to exist any longer – at least I was unable to find it, and I seem to remember that it was at one side of a huge square.

END_OF_DOCUMENT_TOKEN_TO_BE_REPLACED

You travel through space and time and end up with what is supposed to be an exciting new planet with an unknown species – played by clearly human actors standing around in what looks like – oh, I dunno, the Moroccan desert? Yes, I know, there is a limit to every budget, but sci-fi has such promise to dazzle me with something I have never ever seen before, only to disappoint me with the constraints of movie-making and its financial limits. If you want me to follow you to a place where no man has gone before, make sure the make-up department isn’t already there before us, setting up their trailer. Needless to say, I was never a Trekkie and never understood the exuberance of the operatic derring-do of something like Star Wars. To me, A New Hope looked like fun, but it was essentially a western set in space. It was all too familiar because most things and places and beings looked… too close to home. Not strange enough.

END_OF_DOCUMENT_TOKEN_TO_BE_REPLACED

Perhaps it doesn’t need to be said – after all, the film is exceedingly well reviewed – but I want to start by saying it anyway: Blade Runner 2049 is a gorgeous piece of visual art. I wouldn’t go so far as to say that Roger Deakins has surpassed himself; his portfolio does include The Assassination of Jesse James by the Coward Robert Ford, after all. Nevertheless, there are few films this side of the turn of the century, or even this side of the original Blade Runner, that offer as coherent and as gorgeous a window into a world that is at once excitingly different and eerily familiar. And the praise isn’t just Deakins’: the artists that worked on all the individual puzzle pieces that make up the look of Blade Runner 2049 may just deserve most of the awards that exist and some that don’t. I don’t think the film will necessarily become as influential as the original Blade Runner, which pretty much defined what dystopian cityscapes of the near future look like, but aesthetically it manages the almost impossible, reconciling the iconic neo-noir with a more modern, almost anthropological sensitivity and creating something that both recalls the original and adds to it in startlingly original ways.

Just consider this: after the endless night of the original film, Blade Runner 2049 is largely set in daylight scenarios – and it pulls it off.

END_OF_DOCUMENT_TOKEN_TO_BE_REPLACED

So, I hear there’s this new Indiana Jones film on. What’s that? It’s been out for a month or so? Aw shucks…

I’m probably exactly the right age for the Indy movies. I saw Indiana Jones and the Last Crusade at the cinema when I was 14, and I got Raiders of the Lost Ark on video later that same year. As a teenager I enjoyed the hell out of these films – except for Temple of Doom, which I already didn’t particularly like at the time. It’s got fantastic set pieces but doesn’t hold together very well as a film. (And it’s the one Indiana Jones movie, in my opinion, where the stereotypical natives do become offensive and racist… but that’s not my beef here.)

My favourite one of the films was always Raiders. It had a magic, a rawness and an energy that the others don’t match. Last Crusade is the funnier film, but it comes dangerously close to self-parody – added to which, well, it’s pretty much a rip-off of Raiders. So many of the scenes made me think, “Yeah, cool, but haven’t I seen this one already?” You get the same type of intro sequence, followed by scenes at Barnett College, followed by the story proper. You’ve got rats instead of snakes. You’ve got the wrath of God visited on those undeserving. And all of it tries just a bit too hard to be funny.

Last Crusade fares worst when it comes to the side characters that were introduced in Raiders. Both Sallah and Marcus Brody are turned into jokes – and they aren’t particularly good jokes. If it wasn’t for the interplay between Indy and his father, Last Crusade wouldn’t be much better than, say, The Mummy or any other Indiana Jones rip-offs.

Now, finally, Spielberg, Lucas and Ford got their act together and made a fourth film. Lots of fans hated it. Correction: lots of fans hated it on the internet. There’s something about Web 2.0 that brings out the extremist in fanboys and nerds. Something can’t be pretty good or sort of bad – it’s all either perfect, worthy of geekgasms, or utter shite of the “George Lucas raped my childhood!” ilk. 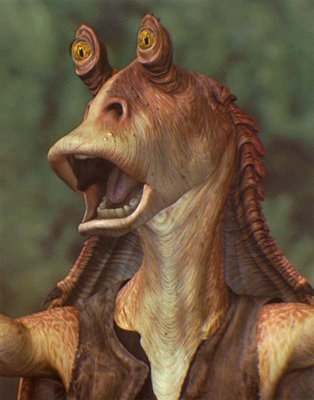 Crystal Skull is neither. It’s the third best Indiana Jones film. It’s enjoyable but forgettable. And it makes a couple of very unfortunate mistakes:

Anyway, the film’s had enough of a critical pummeling. All in all, it was entertaining enough, but not much more so than a competent Indiana Jones knock-off. And somehow mediocrity is almost worse than an out-right bad Indy movie. I just hope that Lucas and Spielberg won’t try to keep flogging this almost-dead horse. At some point it becomes terribly, terribly undignified.

And talking of undignified: have fun with this!