For all the imagination that goes into creating new worlds and fantastic creatures on screen, film and TV are predominantly beholden to naturalism. For these media, suspension of disbelief means being able to accept wholeheartedly what is on screen as real, at least for the purpose of the story you’re watching. Directors, VFX crews and CGI artists need to keep happy the twin deities of Spectacle and Realism: that dragon, that lizard the size of a building, that planet that no one has ever set foot on, they all need to fool us into believing that they are real. 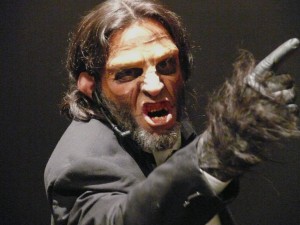 I am not immune to the lure of big screen spectacle, and I like a well made special effect as much as the next geek. I too get pulled out of a film if the greenscreen fakery is too obvious, if the orcs, goblins or giant worms look like My First Photoshop. At the same time, there is something limiting to the extent to which we’re conditioned to expect a narrow, superficial expression of naturalism. There is something liberating to forms that are overtly unreal: even at their most real-seeming the animated worlds of, say, Hayao Miyazaki are made rather than found, and the audience is aware of this, whereas the Pandora of James Cameron’s Avatar needs to look as much as possible as if Cameron and his crew had filmed on location. And the more what we see is removed from the Real Thing (or the Convincing Fake), the more we as audiences are tasked with co-creating these worlds in our imagination. END_OF_DOCUMENT_TOKEN_TO_BE_REPLACED