If there’s one thing that the best of the Marvel movie adaptations have in spades, it’s personality. Compare the dour cinematic worlds of Batman and Superman to that of The Avengers or Guardians of the Galaxy, and the latter are simply much more fan to hang out with. It’s also what Guardians gets most right: almost from the start, we have a cocky, enjoyable Han Solo-alike to take us into a world of wonders and CGI, and differently than in Lucas’ bloated prequel trilogy we look past the pixels and shader effects and see characters. Rocket Raccoon, that rarest of things – a fully realised CGI character not motion-captured by Andy Serkis! -, pretty much repeats that trick; another hero from the mold of Han Solo, though arguably shorter and more furry, and one that is cynical where Peter “Star-Lord” Quill is excited for pretty much everything. Add Groot, Gamora and Drax, and you’ve got yourself the quintessential Marvel team. Batman may have his cool toys and Michael Caine, but I know who I’d rather hang out with. 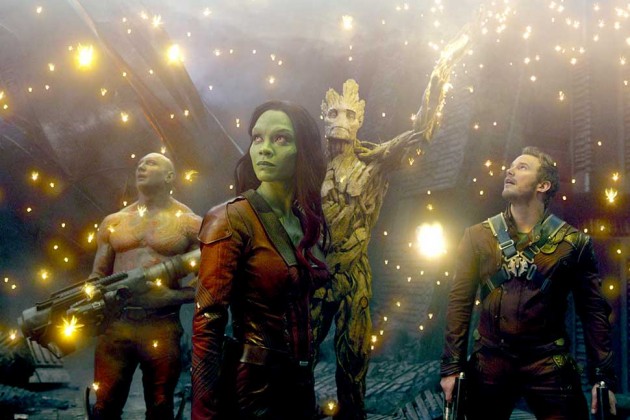 There’s an element of laziness in the film, though. It is entertaining, it’s charming, but there’s a generic quality to Guardians‘ setup, which is the main reason why in spite of dancing baby Groot and “Hooked on a Feeling” The Avengers still works better for me. In Whedon’s movie, the characters don’t get along at the beginning but realise they need to form a messy, dysfunctional surrogate family to have a chance against the Big Bad; Guardians pretty much repeats this blow-by-blow. What it lacks, though, is strong motivations why Star-Lord’s motley crew are antagonistic to each other at the beginning. There are reasons, but they’re all underwritten and don’t really come from the characters: sure, Drax blames Gamora because she was working with the main villain when he killed Drax’ family, and Quill is seen simply as a paycheck by bounty hunters Rocket and Groot, but essentially the characters don’t get along at first because that’s what the plot structure needs. In comparison, the conflicts between the Avengers come from who the characters have been established to be: Tony Stark, arrogant millionaire playboy with a house full of toys won’t take orders from stick-in-the-mud WW2 relic Captain America, Thor is a god-of-sorts who isn’t all that into those teensy humans anyway, unless they look like Natalie Portman, and he’s mostly in it to get back at his brother Loki, and Bruce Banner thinks his life could be a hell of a lot better if people didn’t keep wanting the big green guy to come out and play. Oh, and that’s before we get to Nick Fury, who puts all of these in a room, barely united by their knowledge that Fury is not a man to trust.

The Avengers had charm too, but it did more heavy lifting to make sure that personality wasn’t the only thing it had going. Guardians has more, too, but it’s mostly of the “Ooh, look at that… shiny!” sort – arguably it takes us to visually more interesting places than Whedon’s first Marvel outing. But it’s a bit like the Cantina scene from Star Wars, two hours of weird creatures, exotic planets. It’s colourful and fun, and it works in a way that Batman’s Gotham hasn’t worked since the days of Tim Burton, when it really just worked intermittently. 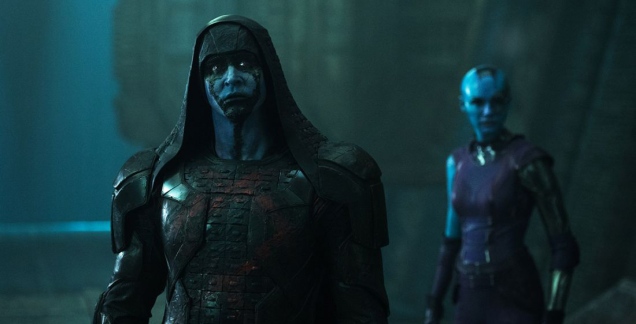 However, there’s definitely one thing that Gotham City has that Marvel’s stable of superheroes is still missing, and that’s strong villains. The Avengers works well enough because Tom Hiddleston brings tons of personality to the table, and it helps that he’s connected (semi-literally) to the quasi-family at the story’s centre. Otherwise, though? Thor 2‘s evil space elf, any of the Iron Man villains, or Red Skull from Captain America? Good actors wasted on boring, perfunctory character conflicts. The interesting conflicts in the Marvel films are those between the good guys, but as soon as they unite to beat up the Big Bad, the films turn into CGI setpieces to fill the remaining fifteen minutes, with little to differentiate between them other than the make-up on the villain. Lee Pace’s Ronan is no different; there may be potential in the character, but in the film we mainly see a replaceable bad guy. Similarly, his henchwoman Nebula looks otherworldly and cool and is played competently by Karen Gillan, but she’s not what people will remember. Guardians is all about “I am Groot!” and awesome mixtapes, about cocky outlaws and cynical raccoons, but practically all of the Marvel films could have done with a Penguin, a Lex Luthor or a Joker. Captain America 2 came the closest to introducing an interesting conflict into the proceedings – and one of the reasons why its villains worked better than Red Skull or Malekith, and why Loki is probably the best bad guy of the whole bunch, is that these are closely connected to our heroes.

With Joss Whedon’s influence hanging over the Marvel Cinematic Universe, the writers may want to look at Whedon’s TV series and his Big Bads – both the ones that worked and the ones that didn’t. Usually it’s the ones that are, or were, or could be part of the family that worked best, as characters and as villains. Marvel has yet to do justice to their antagonists; they’ve got the actors, from Jeff Bridges to Christopher Eccleston, but they haven’t yet cracked the nut of conflict outside their bands of heroes. When they do, when their films have both personality and interesting conflicts that drive the stories? Then they might truly ring in an Age of Marvels. Hopefully one that still has a place for dancing baby tree creatures.