In the hands of a different cast and crew, The Diving Bell and the Butterfly (Le Scaphandre et le Papillon) could have been bad – or worse, it could have been absolutely nothingy. Of course the real-life premise is memorable and impressive – locked-in syndrome, being a prisoner inside your own body – but making this work as a magazine article or even a book is very different from making it work as a film. Without a keen directorial vision, this would’ve turned into the worst kind of movie-of-the-week.

I’ve never seen any other films by Julian Schnabel (the sheer silliness of his name may have kept me from watching his earlier work), but based on this film I’m definitely going to keep my eyes open for Basquiat and Before Night Falls. The movie isn’t overburdened by directorial flourishes, but Schnabel has a strong sense of the visual, in the real scenes as much as in those that take place in Jean-Do’s imagination or are inspired by his words. Talking of which, The Diving Bell and the Butterfly, based on Jean-Dominique Bauby’s memoir (the film could be described as a sort of making-of of the memoir, but that would be far too banal a description for what Schnabel achieves), strikes a deft balance between the visual and the verbal. It hums with the energy of words – Jean-Do is filled with language, even if his condition doesn’t allow him to express them easily. Each word is a battle, each phrase is a war – at least at first, but one of the refreshing aspects of the film is that the women who help the man express himself are all French beauties of the Emanuelle Seigner type (and one of them looks like a Gallic dead ringer for Naomi Watts), and Jean-Do is the kind of man who falls in love, at least a bit, with every woman he sees.

The lightness that the film has, derived equally from Bauby’s ironic tone (he isn’t afraid of laughing at himself and his situation) and Schnabel’s visual idiom, doesn’t detract from its darker side, though. Quite the opposite, in fact. The horror of Jean-Do’s situation makes especially the first twenty minutes almost unbearable at times. Schnabel doesn’t need to emphasise this – he shows, quite simply and unflinchingly.

I’ve only just finished watching the film about an hour ago, so my first impression is still fresh and might change. However, throughout the movie I kept thinking of another film, this one by Alejandro Amenábar: The Sea Inside (Mar Adentro), also a true-life story, based on the struggles of a Spanish quadruplegic fighting for his right to die. Both films are centred on men who have been taken prisoner by their failing bodies; both men are full of life, yet have been deprived of the ability to life as fully as they desire; and both The Diving Bell and the Butterfly and The Sea Inside use similar imagery, especially the ocean and seaside. To some extent they feel like a French and a Spanish take on similar issues and would make near-perfect companion pieces. 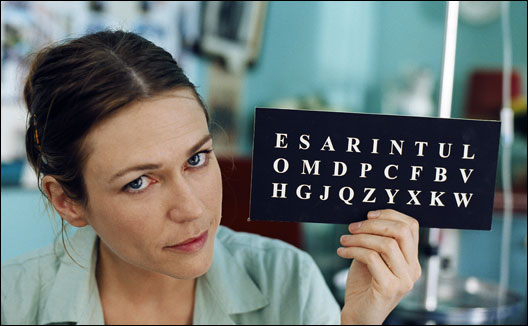 On a different note: we’ve added another HBO series to the already considerable list. It’s called Wome, at least if you ask Michael Palin:

And like so many HBO series, it’s got a pretty cool title sequence. Enjoy!