A quick “Hey there!” in between a week’s holiday in Paris and a work trip to the UK – and since the heat is making my brain frizz out on a semi-regular basis and I don’t have the stamina for a longer-form post, here’s a variety pack. It’s a strange one, though; for once I’m not writing about a couple of films I’ve watched recently but about a few topics that have been hanging around in my brainpan, equally lacking in energy due to summer having icumen in.

What did you do in the war, dad? – I was in an HBO miniseries, son. 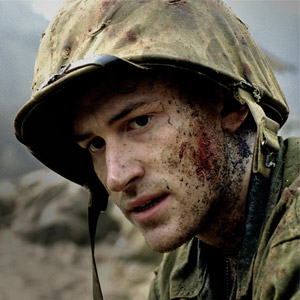 We’re currently watching HBO’s The Pacific, a sort of follow-up to Band of Brothers. It’s a good series with great production values and strong performances, and the theatre of war it depicts does come across as distinctly different from the Western front of the earlier series. At the same time, there is definitely something a bit samey about the two series, and about so many American war films of the last ten, twenty years in general. (Clint Eastwood’s Flags Of Our Fathers and Letters From Iwo Jima come to mind.) They don’t go in for the easy, unambiguous heroics of the war films of yore, yet the subtext still seems to be this: these men we’re watching, the soldiers they’re standing for – they deserve our respect. Not because they’re heroes to begin with, but because they’re ordinary men that become heroes in extraordinary circumstances. The experience of war – and, on a more meta level, the act of turning them into film, with all the trappings of the genre – ennobles them. And this is the bit that I’m uncomfortable about: as riveting as a well-made war film is, very few of them end up not telling you unquestioningly that these men and what they do is noble. Being in a war and watching your buddies geting shot to pieces may be hell, but the act of going to war is a noble one. Sad, yes, but that only makes it more noble. Perhaps the Second World War was the kind of fight that sustains these narratives that, at least implicitly, suggest the Good War. Regardless of the ideologies of The Pacific, though, part of me wishes for a genre piece that doesn’t insist with its elegiac soundtrack and close-ups of brothers in arms giving their lives for each other that warfare is a noble endeavour and that soldiers unquestioningly deserve our respect. (For the record, there are scenes and narrative strands throughout The Pacific that provide glimpses of a different perspective – but they still end up surrendering to the superior firepower of the filmmaking that keeps emphasising, “Noble! Sad! Elegiac! And, yes, patriotic!”, rather than leaving me to form my own thoughts.)

History will teach us nothing…

… except that the Middle Ages were oh-so-pretty. And Elizabeth Woodville, wife of Edward IV and Queen of England, could summon storms by going “Oooh, ooooh, ooooh…!” in a menacing way. Not a bad parlour trick!

Anyway, watching The White Queen has made me long for Rome‘s way of handling history. It’s a tricky genre, historical fiction (and perhaps I should just accept that The White Queen doesn’t belong to that particular genre so much as to that of historical romance), and one thing that often goes wrong is that such fiction wants to have its cake and eat it: it wants to show that these olden-times people were different from us and did things differently and we shouldn’t judge them from our anachronistic vantage point of being all enlightened and such stuff, yet then in the next scene it espouses a completely ahistorical, modern point of view to make the characters relatable to us. Balancing these two narrative impulses – Ooh, look at how different and weird these people are! And now look how they’re just like us after all! – is extremely tricky, and I don’t think The White Queen has handled it particularly well so far. In one scene we see the young king almost raping his queen-to-be when she doesn’t assent to a quick tumble in the grass, yet ten minutes later when he actually says he’ll marry her she goes all swoony and Twoo Luv, like a 20th/21st century teenager in love for the first time. If we’re supposed to see this through modern eyes, how can we accept Edward’s earlier attempt at Lancastrian date-rape? Only if we give him the benefit of historical perspective – of course, he’s the king, and she’s a woman at a time when women have very little power, it’s rarely love that starts a relationship in these days, if she’s lucky she’ll learn some affection for him – but then her later behaviour makes little to no sense, because it is entirely predicated on current ideas of romance. Again, though, perhaps that’s it: the series definitely puts romance before history. 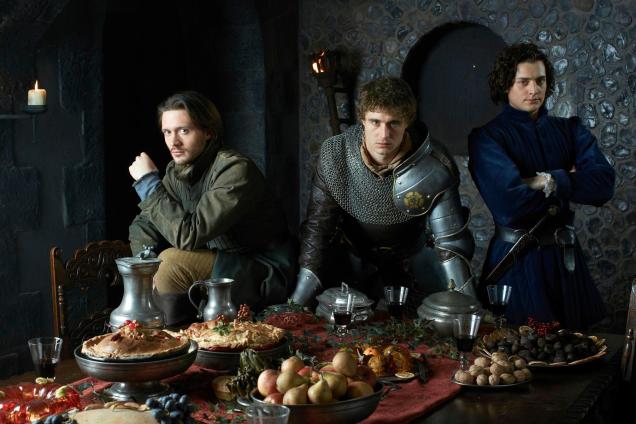 Alan Sepinwall, TV critic and blogger, is currently finishing his Deadwood Rewind. His perceptive, eloquent posts on the series’ third season are a great read – not least because he’s got some of Deadwood‘s actors visiting the comments threads on a regular basis, such as Jim Beaver (Ellsworth), Keone Young (Mr Wu) and W. Earl Brown (Dan Dority). It’s fascinating to revisit the series through their eyes. (Here’s a link to the Deadwood Rewind for episode 6 of the third season, “A Rich Find”, with some great contributions by Jim Beaver.)

We’re getting close to the end of The Sopranos. Both Rome and Carnivale only have one more season to offer us. And at the speed at which we’re going through West Wing, President Bartlett will have finished his second term in record time.

How to find good, new series? Used to be, I could pretty much get three out of four HBO series on DVD and be happy for the next year or so. Even if some of them found an untimely end, the journey was absolutely worth it.

Now, though? Can’t say I’m all that interested in Hung, and I’m not sure I would enjoy Big Love (which may be due to my lack of trust in Bill Paxton’s acting abilities – “Game over, man!”, indeed…). What about all these new series starting on other channels, though? The Elmore Leonard series Justified sounds like it might be fun, and I’m definitely hoping to get Caprica, provided that it doesn’t get cancelled after one series.

However, HBO seems to be stepping up its game, with not one but three series premiering this year. The one I’m currently most excited about is the one I only found out about five minutes ago: Boardwalk Empire, by Sopranos alum Terence Winter and Martin Scorsese – yes, you read that right, the Raging Bull of mob cinema himself! Check out the trailer, which looks like the murderous bastard child of Once Upon a Time in America and The Sopranos:

Also looking quite promising, although in a more Norman-Rockwell-meets-Interracial-Slaughter way: The Pacific, which seems to be a sort of companion piece to Band of Brothers. Oh, and it stars the little kid from Jurassic Park, all grown up. Listen, boy, you should know better than to return to island jungles! (Cue bad “Doyouthinkhesaurus?” jokes about jungle warfare…) Again, let me peruse YouTube:

Finally, the creators of my favourite series (it shares the pedestal with Six Feet Under) are doing a new show on the aftermath of Hurricane Katrina. It’s called Treme and it’s got the usual awesome cast of actors, including Wendell Pierce and Clarke Peters. It’ll be good to see Lester Freamon and Bunk Moreland back in action!