Is The Road a depressing movie? Do cannibalistic chickens have lips? Good question, actually – does a beak count as lips? Anyway, I’m ambivalent on the matter… not of poultry and their facial appendages, but of The Road‘s overall outlook on life. It is a powerful piece of cinema, though – perhaps almost too powerful. I wouldn’t be too surprised if a number of audience members found the grim, sad plot and atmosphere of the film so overbearing they resisted its effects and perhaps even resented its relentlessness.

And relentless the film is, which probably doesn’t come as a surprise to those who have read Cormac McCarthy’s novel – yet it’s not the relentlessness of so many post-apocalyptic films. There are moments that in other films might be thrilling, scenes where the film’s wandering father and son are pursued by cannibalistic survivors (no chickens, though), but in the end it’s not these fleeting moments of jeopardy that are the greatest threat to survival in the world of The Road. It’s finding the strength each morning to go on. The father played by an increasingly Giacomettian Viggo Mortensen has his son to keep him going, but most of the survivors we see don’t even have that. They seem to be alive simply because they haven’t died yet. 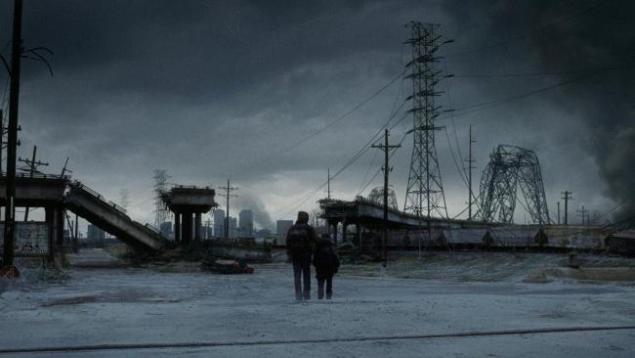 Nevertheless, The Road is about survival, not only physical survival but that of the soul, of the part that makes us more than glorified animals. As the son puts it in his childish words, “Are we still the good guys?” You’d think that good and bad would become relative in a world where you avoid other survivors because it’s more than likely that they only survived by preying on others, and the father’s reluctance to show compassion for others makes perfect sense. The son’s insistence on doing the right thing is naive and borders on the suicidal – yet survival, to the son and eventually the father, should not simply be about delaying the inevitable. And it is in this insistence that there is more to living than simply not having died yet, even in a world that seems to be all about death, that The Road, for all its horrors and sadness, is an idealistic story.

This may be the point where The Road loses some: it is difficult to accept the hopeful notes scattered throughout for the sheer weight of all the horrors we’re presented with. Does a single surviving beetle, a dog that’s alive against all hope (and hasn’t been eaten by its famished keepers) constitute a convincing ray of sunshine against the billions dead, the destroyed wildlife and decaying forests (by the way: this is the first film where I had to switch off the subwoofer – because the trees crashing to the ground were simply more than we wanted to inflict on our neighbours!). I bought both the despair and the glimmer of hope, but the former may overpower the latter for many.

Through it all, though, the one thing that’s stuck most in my mind is the desolate, grim beauty of the world Hillcoat depicts in his adaptation. There’s dark poetry in McCarthy’s prose, and the visuals of the film capture this poetry impressively well.