… and the award for Best April’s Fools Joke goes to – The Criterion Collection, who advertised that this masterpiece of modern cinema would soon join their ranks of superb DVD and Blu-ray editions: 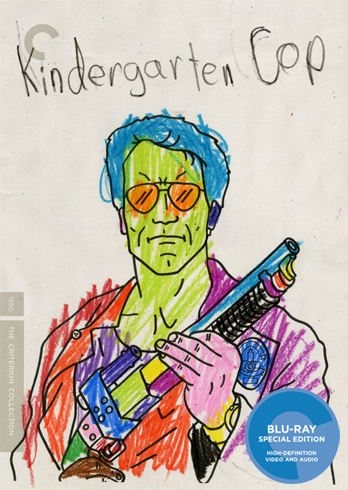 And yes, they went the whole hog. Check out their synopsis of Reitman’s often underrated gem:

Historically, the policier and the family comedy were two distinct categories. Then, in 1990, Kindergarten Cop gave us all a lesson in genre revisionism. With muscular sensitivity, Hollywood’s last action hero Arnold Schwarzenegger embodies detective John Kimble, who is compelled to go undercover as a teacher of five-year-olds in order to catch a ponytailed drug dealer. Though it’s distinguished by pulse-pounding suspense, a Crayola-bright palette by cinematographer Michael Chapman (Taxi Driver), and trenchant observations about education in the Bush I era, the film’s emotional center is Schwarzenegger’s gruff yet good-tempered interaction with a class full of precocious scamps, including a tumor-forewarning death-obsessive and a genitalia expert. By leavening a children’s film with enough violence to please even the most cold-hearted bastard, director Ivan Reitman shows that he refuses to color inside the lines.

Which is only topped by some of the extras:

I would so buy that in a heartbeat – even before checking out the Criterion “Three Reasons” video: