Telltale’s The Walking Dead was a surprise to most critics. While many of their earlier adventure games received moderately positive reviews, no one expected them to deliver one of the critical successes of 2012, and they definitely didn’t expect anything as emotionally engaging and harrowing as what we got. I was just as surprised myself; I’d read the comics and seen some of the TV series, but to my mind the game was by far the most effective of the three incarnations of The Walking Dead. The TV series delivered on the action, but it meandered and had too many characters it didn’t know what to do with, whereas the comics to my mind decided that the most effective way to get to the readers is to shock them.

Myself, I quickly got bored with the escalating brutality and gruesomeness of the comics. It very much felt like they were telling variations of the same story, turning up the volume as the story progressed. The underlying emotional arcs, though, remained the same – and progressively got drowned out by the visceral cruelty. 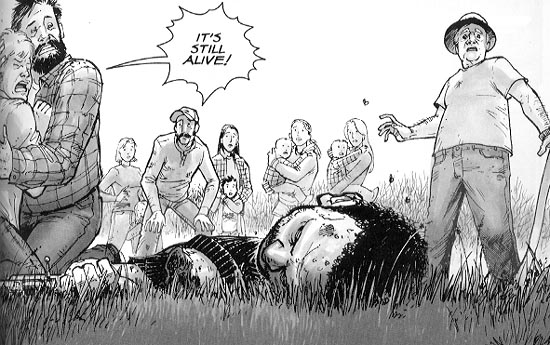 Telltale’s game series didn’t skimp on bitey walker-on-human action, but it didn’t rely on shock to carry most of the weight. It mainly worked on the strength of the central relationships that developed slowly, decision by decision. Would you have the protagonist side with this character or that one? In a split-second decision, who would they save? In the long run, your decisions didn’t change what happened, but they changed how you felt about things. They made the story personal, and this was reinforced by the quiet moments. Similarly to Cormac McCarthy’s The Road, the story was less about “Will you be butchered horribly by cannibals and your flesh devoured by crazed survivors?” than about feeling responsible for another person succumbing to despair or clinging to hope. Yes, there were crazed cannibal survivors, but they were the background to a story that was relatably human.

Time was an essential factor in the game, however. The Walking Dead got players to care about its characters over several storylines, developing relationships slowly. You didn’t feel the same way about little Clementine at the end of the first episode as you did when the final credits rolled when you finish episode 5. When Telltale published the extra episode “400 Days”, with few direct links to the game’s first season, they decided to do away with what had worked so well: “400 Days” tells five stories, in chunks of no more than 15 minutes, starring five different sets of characters. By the time you’ve got to know one of them, you’re whisked away to play a different character. It’s zombie flash fiction, basically, and it’s a strange choice, coming from a developer whose most successful game depended on slow, gradual character development.

“400 Days” is not an unconditional success. Not all of the storylines are equally engaging, and as with all zombie fiction, there’s a risk of diminishing returns – there are a handful of tropes that stories of the undead keep returning to – but I was surprised by how effective the extra episode was nevertheless. The game ends with another survivor trying to recruit the protagonists of the individual episodes for a settlement up north, and they accepted or declined based on the decisions I’d made a few hours earlier. It didn’t feel like winning or losing the game: and when several of the characters decided to decline the offer and set off on their own, it felt like I’d failed them. I’d failed to show them that even in a world of the dead trust was something worth pursuing.

Both players and reviewers, while largely intrigued by “400 Days”, noted that whatever emotional resonance the game had was less strong by its end than the ones developed in the original five episodes of the first season. This is undoubtedly true – but as developers experiment with different story formats and different ways of engaging the player, we only benefit. Not all such experiments work, and few work 100%, but there are many as yet untried methods of telling stories with the medium. Doesn’t mean that every game has to tell a story in the first place, or that every game must be a formal experiment – but games are a literal playground for storytellers, from the likes of Braid and Journey to Dear Esther and The Walking Dead. Personally I’m excited to see where they’ll take us next. 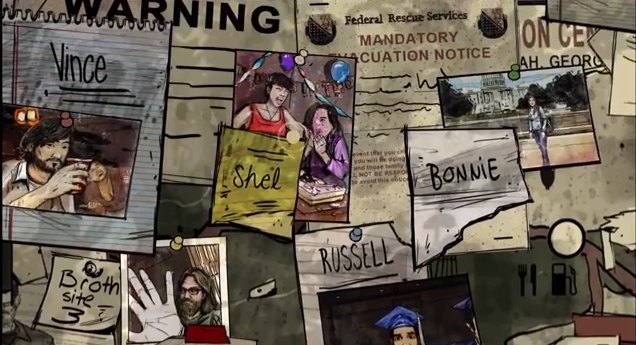