END_OF_DOCUMENT_TOKEN_TO_BE_REPLACED

I spent most of last week examining undergrad students of English studies, together with two colleagues. For the oral exam, students had to read and discuss an article, and one of my colleagues used a New Yorker article called “Cannon Fodder: Denouncing the Classics.” Much of the discussion was about what makes a classic work of literature – which made me think about the term ‘classic’ and how it’s used with respect to film.

What sort of films come to my mind when I think of classic movies? Casablanca, definitely. The Third Man. Probably much of Hitchcock’s oeuvre, and Gone With The Wind – and let’s not forget The Wizard of Oz, It’s A Wonderful Life, Citizen Kane, Some Like It Hot. I might even add later films such as The Godfather (and I’ll gladly add The Godfather Part II).

However, I don’t think I’d put films such as Taxi Driver on that list, or Apocalypse Now. I might even hesitate to add Jules et Jim (in case you were wondering whether English was the only language), although it definitely looks like what I’d imagine a classic to look. The thing is, when I think of classic movies, I think of films that are undoubtedly great examples of cinematic craft – but that are comfortable and cosy, films you can slip into as you would into a fluffy dressing gown. 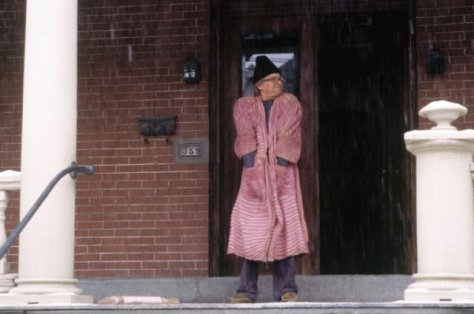 Coincidentally, one of the essay topics that the students could choose for their written exam was a quote by Franz Kafka:

I think we ought to read only the kind of books that wound or stab us. If the book we’re reading doesn’t wake us up with a blow to the head, what are we reading for? … A book must be the axe for the frozen sea within us. That is my belief.

Disregarding the programmatic nature of Kafka’s statement – I think reading, or watching films, to be comforted and entertained is absolutely valid – at least when it comes to movies I don’t think of classics as films that wound or stab us. That’s simply not what the word connotes for me. Is it the same with literature? For whatever reason, I’m more comfortable to call a “deeply weird” (in the words of one of my colleagues) novel such as Ulysses, or earlier examples of weirdness such as Don Quixote and Tristram Shandy classics, but when it comes to movies the word seems more apt when describing the burnished, oak-and-leather respectability of Hollywood’s Golden Age. The Easy Riders, Raging Bulls–era works – well, the best of them – still have the power to wound and stab, to disorient and destabilise. The strongest films coming out of the French nouvelle vague are still thrillingly fresh, as is De Sica’s The Bicycle Thief in many ways. Calling these films ‘classics’ would be accurate in a literal sense, I’d say, but also strangely sad: at least in my understanding, once you call a film a ‘classic’, you deem it safe. Time has pulled its fangs.

Or perhaps we have, by regarding films as classics. Some of the ones I’ve mentioned above still have their teeth when you look at them with an open mind – even as cornball and (seemingly) cosy a classic as Frank Capra’s It’s A Wonderful Life, a film that has a surprising degree of darkness hidden just beneath the surface. The New Yorker article mentioned above ends by saying that classic literature should be argued about and fought for – and when it comes to movie classics, that may be exactly what we should keep doing. We shouldn’t be too quick to consign these films to the old people’s home of the cinematic arts and only visit them when we want a nostalgic afternoon with Gramps, because many of them aren’t nearly as comfortable as we make them out to be in remembering them.