Two cloaked figures sliding down a glittering dune, singing to each other. A hunter in Victorian garb, facing down a gigantic hairy creature on a dilapidated bridge. A grizzled middle-aged man and a young woman making their way through a ruined, overgrown city. Grinning figures, half-human, half-squid, swimming salmon-like through splotches of paint. Hundreds of extraterrestrial worlds, the skies above them in hundreds of different hues. An eagle, half visible through the trees, half concealed by the empty gaps between them. 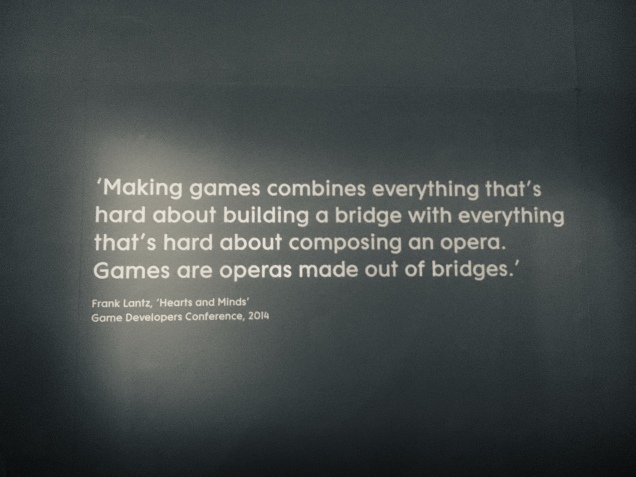 END_OF_DOCUMENT_TOKEN_TO_BE_REPLACED

Okay, it’s “Plug an old game” time. Yesterday I finished my second or third playthrough of Grand Theft Auto: San Andreas. And it’s still one of the most versatile games I know – it’s probably the truest “sandbox game” that’s out there. For those of you who aren’t computer game nerds like myself, here’s a handy definition from Wikipedia:

A sandbox-style video game (or a video game with an optional sandbox mode) is a video game with an open-ended and non-linear style of gameplay, or a mode of gameplay within a game that is more often played in a goal-directed manner. The sandbox analogy is used to describe this style of gaming because, as with a physical sandbox, the user is simply allowed to do what he or she wishes (with the available game elements and within the limitations of the game engine — the metaphoric toys within, and boundaries of, the sandbox).

Now, what does that mean in concrete terms? San Andreas is a story-heavy game, it’s “played in a goal-directed manner”, but it gives you a lot of freedom in a) how you go about achieving the goal and b) how you spend your time in between missions. The game world is huge – you’re given three virtual cities/states to play around in: LA-inspired Los Santos, San Fierro (based on San Francisco) and Las Venturas, which is eerily similar to a certain desert city replete with casinos and organised crime. And while the story itself is enjoyable enough, some of the most fun can be had just boarding one of the many vehicles (cars, bikes, boats, planes) and zooming around. Personally, I get most of a kick out of navigating the hills of San Fierro on my trusty BMX bike, but here’s some of the fun’n’games that others came up with.