Every now and then, I will play a horror game. Not often, since I don’t regularly feel the need to be scared, and because so many horror games will mainly run on atmosphere and jump scares, the latter of which I’m not particularly interested in, regardless of the medium. Still, every now and then, I want to be scared. I want to feel dread at being in a place that clearly doesn’t want me there. That is vast and uncaring, and if it is out to get me, that’s just because I am so small and insignificant, yet foolhardy enough to venture there and therefore it’s all my fault. The danger to me is incidental. I went to the dark place, so anything that happens to me while I’m there is entirely on me.

And when I’m there, I suspect that the words I will hear are “Turn, one left, don’t cut.”

END_OF_DOCUMENT_TOKEN_TO_BE_REPLACED

Well, for once I won’t write about last night’s episode of Lost (titled “Catch-22”). Why? Because it wasn’t very interesting – but neither was it so horrible that I have to share my eye-gouging terror with the world (and the Keira Knightley fans who may want to eviscerate me after yesterday’s entry… Just kidding!).

So, instead let me regale you with my current PC gaming choices: Colin McRae DIRT (which I’ve mentioned here before) and Thief: Deadly Shadows. The latter is a game that I originally played when it came out, but now, two computers and three videocards later, it runs much, much smoother than it ever did. However, the game bears sad witness to who I really am: someone who gets a kick out of skulking in the shadows, waiting for people to pass, and then hit them over the head with a blackjack and rob them blind.

Yup, that’s me. I prefer crouching in the darkness and waiting, and then knocking out my enemies. With almost any shooter game, if I have the option to put my opponents to sleep, that’s what I’ll do. There are few things as satisfying in a game as a totally non-lethal headshot with a tranquiliser dart and then dragging the motionless body behind a wall or some rocks… and then waiting for the guy’s buddy to turn up, looking for his mate – and do it all over again.

Now, as far as DIRT is concerned… I’m not bad at it. Not totally bad, at least. But sometimes… well, sometimes my driving looks pretty much like this – and (moving) pictures say a lot more than words in this case:

No news on the game front, really; I’m still playing Stalker (pure nukular goodness!), Neverwinter Nights 2 (it’s okay, but I still don’t get the enthusiastic reviews), Anachronox (slowly getting to the end) – and a rallye game called Colin McRae DIRT, best proof that the streets are safer with me off them.

I also haven’t watched any new films (or rewatched old ones), so I’ll take this opportunity to write about films that I expected to like – but didn’t. Usually when that happens, it’s that I like the director’s previous work a lot, but then fail completely to connect with the film. Or it’s that a reviewer I like gives the film a glowing review that I fall for. By the way, I don’t share the dismissive arrogance many people have when it comes to reviewers – good critics don’t necessarily share my opinions 100%, but 1) they have to recognise what a film is trying to do and 2) I have to know where they’re coming from after reading the review. What I do hate is critics who pan a genre film, for instance, because it isn’t Truffaut, critics who mistake their dislike for a certain kind of story or storytelling for its inherent unworthiness. And with a good reviewer, it doesn’t really matter whether they liked a film or not – I will have a good idea from what they write and how they write it whether I’m likely to enjoy the film.

Before I get started on this in earnest, though, I’ll have to come up with a list of films that fit. I’ve got a few ideas: Punch Drunk Love, for one, and my own favourite, Russian Ark. (Okay, technically that latter one is a “Film that this blogger hated with a vengeance”, but more of that later.) So, tune back in very soon!

P.S.: Films that – ironically, predictably – didn’t click for anyone, part 1:

About a week ago I was informed by my love that we’d be watching Pride and Prejudice on Friday. Not the BBC six-hour extravaganza – that’s still on the menu for later – but the recent film version with Keira Knightley and Matthew “I’m an MI5 agent – get me out of here!” MacFadyen. Since I’d heard good things about the film, I resigned myself to my fate with rather less grumbling than might be expected. After all, I’m secure enough in my sexuality to watch a Jane Austen film without fearing to catch “the gay”.

No, no, no… It’s not what you may be thinking now. I wasn’t secretly thrilled at the thought of 2+ hours of Keira Knightley being all witty and sarcastic and sexy. Thing is, I don’t find her very sexy at all. She’s not ugly, but a) she’s too girlish and b) she’s too thin. Back when I saw Bend It Like Beckham, I thought that there’s a very attractive woman in this film, and her name is Parminder Nagra. Keira? I wouldn’t mind cooking a proper dinner for her, but that’s about as far as my feelings towards her go. 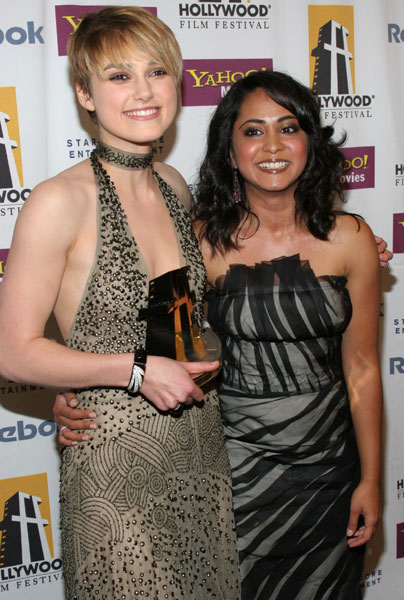 Also, I never thought that she was a great actress. All the films I’d seen her in, she was basically the same character: feisty heroine/modern grrrl who can hold her own with the boys. I mean, like, hello! Boring! (Or something to that effect.) However, I must say after watching Pride and Prejudice that there’s more to her, provided that the director and cinematographer and make-up artists and producers don’t keep telling me, “You must desire this woman! If you don’t, there’s something wrong with you!” Her Elizabeth Bennet was far more interesting than any of the other characters I’d seen her as.

In general, the film was surprisingly good. Now that I’m no longer teaching at an English Department, I can perhaps confess that I’m not too keen on Jane Austen. Sure, she’s witty, but I wish she’d written only one novel or perhaps short stories. Admittedly, I’ve only read Emma, but with the Austen film adaptations I’ve seen I always felt déjà vu. The 2005 P&P film has its faults: the pacing is off, with the beginning feeling rather rushed and the middle too leisurely; some of the more modern camera moves and edits fail because the film tries too hard to be “contemporary”; and there’s entirely too much giggling! But at least in the European version, there was something nicely understated about the romance: as a matter of fact, many of the romantic couplings are less about brainless passion than about a mutual liking combined with a sense of pragmatism. Or, in one case, about stupidity. And the film doesn’t try to gloss this over.

Finally, talking of gloss, or lack thereof: while the film looks lovely much of the time, it doesn’t go for the Heritage look where even dirt is disconcertingly clean. There’s mud, there’s geese and pigs (with big dangly man-bits – what a strange scene!), and things aren’t antiseptic. The film didn’t have the picture postcard look, the “Wish you were here in the 19th century with us!” feel that so many costume dramas insist on, and it was all the better for this.