I have this thing where I sometimes prefer a later, arguably derivative variation on a theme to the original. I enjoy Tom Stoppard’s Rosencrantz and Guildenstern Are Dead considerably more than the Beckett plays it is clearly, heavily inspired by. I find Frank Miller’s The Dark Knight Returns grating and much prefer some takes on Batman that take their inspiration from Miller but do their own thing with it.

Similarly, although in so many ways it looks to Günther Grass’ seminal The Tin Drum (1959), at times almost to the point of plagiarism, I would choose to re-read Salman Rushdie’s Midnight’s Children, published in 1981, over Grass’ novel any day of the week. Have at me, German Studies PhDs!

END_OF_DOCUMENT_TOKEN_TO_BE_REPLACED

Yup, I’m back. You may not have known that I was gone… but I was. Two weeks of holidays, baby, and sorely needed ones as well.

What’s happened in the meantime? Well… I saw and enjoyed a play by Beckett. In spite of a major in English Literature, I always felt that Beckett’s plays were too long by half – and I still think so. Yes, the length (and resulting tedium) are part of the point, but I’ve always prefered his short plays to Endgame, or Waiting for Godot for that matter. What can make the latter much more enjoyable, though? Good actors, or to be more precise, Magneto and Professor X. Or Jean-Luc Picard and Gandalf. Those two godfathers of the English stage made the play more than worthwhile. 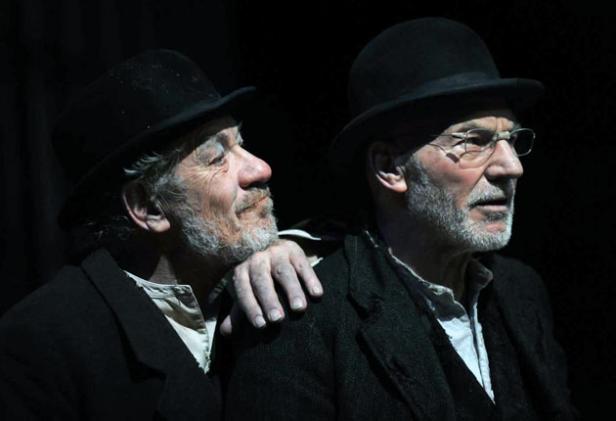 Less enjoyable, though, was the current London production of Tom Stoppard’s Arcadia. Yes, I compound my iconoclasm as a Beckett-disliking EngLit major by prefering the derivative Stoppard to the originator. Take that, SDH! Arcadia is one of my favourite plays, a wonderful blend of wit, intellect and heart. I fell in love with the play when I saw a fantastic amateur production done by a German student drama group.

So, with a play like this and a professional cast and crew, what could go wrong?

Well, mainly one thing: whether it’s the director’s fault or the actors’, they got the one central relationship of the play – between Thomasina, precocious 19th century teenage genious and Septimus, her tutor – wrong with a spectacularly wrong-headed interpretation of Thomasina (and a very mediocre Septimus). As a result, the production didn’t even begin to have the heart it needs to balance its cerebral qualities. If there is no ongoing flirtation and attraction between the two, one that Septimus is hardly aware of, then the final scene between them falls flat.

And fall flat it did. Having taught the play, I was constantly aware of what it could be and what the production failed to make of it. It had some strengths, mainly in the present-day comedy of academia and in a fairly strong Bernard Nightingale. (Oh, I wish though that I’d been around for the play’s original production, with actors such as Felicity Kendall, Bill Nighy and Rufus Sewell.) But without the heart, Arcadia is rendered flat and unengaging, rayless and pathless.

Okay, that’s enough for now. One thing, though, before I’m off: thanks to Rock Paper Shotgun, a computer game blog, I stumbled upon this story which has nothing to do with computer games and everything with sweetness and sadness and John Hughes. Well worth reading, unless anything even approaching sentimentality makes you come out in a rash.